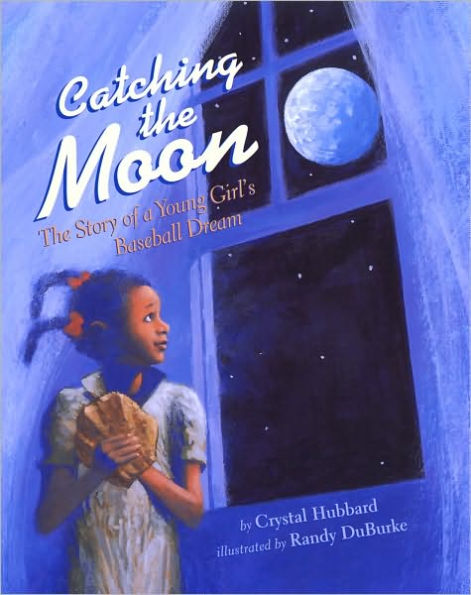 “You’ve got a good arm, little miss, and you run fast. But I don’t take girls in my camp,” Mr. Street. –Catching the Moon

Catching the Moon: The Story of a Young Girl’s Baseball Dream

If there is anything in the world better than playing baseball, Marcenia Lyle doesn’t know what it is. As a young girl in the 1930’s, she chases down fly balls, steals bases, and dreams of one day playing professional ball.

With spirit, spunk, and a great passion for the sport, Marcenia struggles to overcome the objections of family, friends, and coaches who feel a girl has no place on the field. When she finally wins a position in a baseball summer camp sponsored by the St. Louis Cardinals, Marcenia is on her way to catching her dream.

Based on Marcenia Lyle’s life, Catching the Moon shows how one girl made her dream come true, despite being discouraged to chase her dream. Marcenia’s parents and her classmates think that Marcenia’s dream is impossible. Instead of giving up, Marcenia works harder and eventually proves that baseball isn’t just a “man’s game.”

Marcenia’s story has baseball action as well as dialogue, which keeps the story moving at a fast pace. Catching the Moon shows the prejudices that Marcenia faced during the 1930s. However, instead of being angry or giving up, Marcenia works hard to prove herself. In the end, Marcenia’s can-do attitude pays off and she eventually plays professional baseball. Marcenia’s story highlights the importance of hard work and persistence.

Catching the Moon is a picture book that uses pen-and-ink and acrylic illustrations to bring Marcenia’s story to life. The illustrations mostly use shades of brown and blue which recreates the feeling of a blue sky above a baseball field.  Catching the Moon is a picture book and has 7-11 sentences on each page. Because of the story’s vocabulary and sentence structure, parents should read the story aloud instead of having the child read it independently.

Catching the Moon will encourage readers to work hard in order to make their dreams a reality. The fast-paced story will entertain readers as it teaches the value of persistence. Catching the Moon will appeal to sports fans as well as anyone who has big dreams. Readers may also want to add Mae Among The Stars by Roda Ahmed to their reading list. Both stories encourage readers to work hard and dream big.

“You’ve got a good arm, little miss, and you run fast. But I don’t take girls in my camp,” Mr. Street. –Catching the Moon