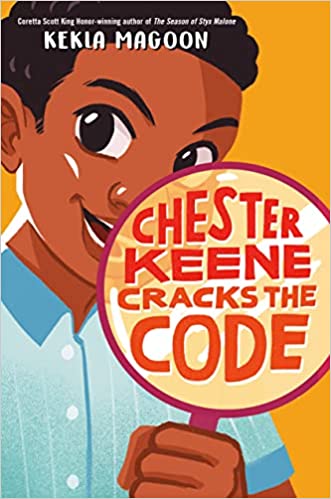 “Humiliation is being zip-tied to a dumpster in an alley, after utterly failing to be heroic. Mortification is having to be cut loose by mall security and sitting in mall jail while they call your parents from the gray phone on the wall,” Chester. –Chester Keene Cracks the Code

Chester Keene takes great comfort in his routines. Afterschool Monday to Thursday is bowling. Friday, the best of days, is laser tag! But Chester has one very special secret—he gets spy messages from his dad. Chester thinks his father must be on covert government assignments, which is why Chester has never been able to meet him.

Then one day, Chester’s classmate Skye approaches him with a clue. They’ve been tasked with a complex puzzle-solving mission! Skye proves to be a useful partner and good company, even if her free-wheeling ways are disruptive to Chester’s carefully built schedule. As Chester and Skye get closer to their final clue, they discover the key to their spy assignment: they have to stop a heist! But cracking this code may mean finding out that things are not always what they seem.

Chester is used to being alone. Nobody sits by him at lunch. Nobody sits by him on the school bus. And nobody helps him when Marc bullies him. His dad is the only person that Chester can talk to, but he’s never actually met his dad and they only communicate through emails. But in Chester’s greatest time of need, his dad goes silent. So, when a strange clue is left on his door, Chester is convinced that his dad is a spy in danger—and only Chester can help. When Skye approaches Chester with the other piece of the clue, the two are forced to work together even though Chester would prefer to solve the mystery on his own.

Chester Keene Cracks the Code has a slow start, but once Skye jumps into the story, the story takes off on a fun hunt for clues. Even though Chester is a bit “difficult,” Skye doesn’t let his quirks chase her off. And soon, Chester discovers that he likes having Skye as a friend, even though she is impulsive. While the clues add mystery to the book, Chester and Skye’s developing relationship adds heart and teaches readers the value of friendship. Even though the story is written from Chester’s point of view, readers will be able to relate to Skye’s annoyance when Chester gets difficult.

Throughout the hunt for clues, Chester thinks his father is leaving the clues. While Chester thinks about the need to solve the clues and help his father, there is no clear reason that explains why Chester believes his father is in danger. Because of this, Chester’s constant thoughts about his father’s danger become a bit tedious. However, many readers will relate to Chester’s feelings of abandonment and his deep desire to meet his father. Chester eventually learns that with or without his father, he is surrounded by people who love him, and that is enough.

Even though Chester and Skye must solve the clues left for them, the clues are so specific to the characters that the readers don’t have a chance to solve the clues themselves. Despite this, the story contains enough mystery and adventure to keep readers interested. Plus, the story teaches the importance of friendship, family, and speaking up when being bullied. Chester realizes “people make mistakes. . . Perfect—it doesn’t exist.” Overall, Chester Keene Cracks the Code is a fun read that shows the importance of embracing the people in your life and accepting them for who they are.

“Humiliation is being zip-tied to a dumpster in an alley, after utterly failing to be heroic. Mortification is having to be cut loose by mall security and sitting in mall jail while they call your parents from the gray phone on the wall,” Chester. –Chester Keene Cracks the Code