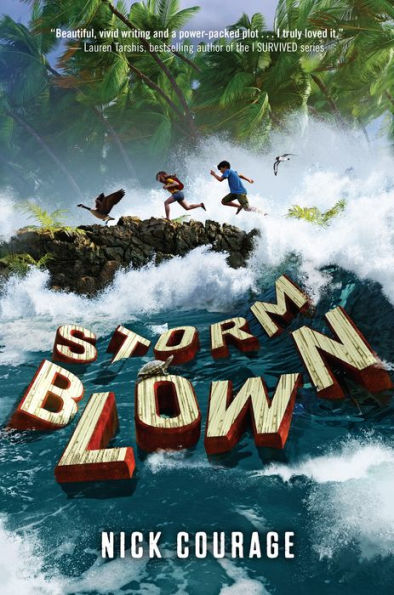 “It was hard to imagine a time when the world would be healed again. But Padrino Nando was hopeful. Like the workers on the beach, there were people helping everywhere he looked.” –Storm Blown

A little rain and wind doesn’t worry Alejo—they’re just part of life at the beach. As his padrino says, as long as there are birds in the waves, it’s safe. When people start evacuating though, Alejo realizes things might be worse than he thought. And they are. A hurricane is headed straight for Puerto Rico. Worried that his padrino needs help, Alejo braves the storm in order to search for him.

Emily’s brother, Elliot, has been really sick. He can’t go outside their New Orleans home, so Emily decides to have an adventure for him. Emily wades out to a tiny island. For once, Emily wants her mother to worry about her. While hiding from her home, she befriends an injured goose and a shy turtle. Emily doesn’t know that a storm is racing her way.

As the hurricane rages across Puerto Rico and heads towards the United States, both kids will face life-threatening danger. Soon Alejo and Emily will be in the storm’s deadly path, but nothing has prepared the kids for Megastorm Valerie. Who will survive nature’s fury?

Like a wind-blown leaf in a hurricane, Storm Blown jumps from many different settings and points of view, which quickly becomes confusing. Although Alejo and Emily are the two main characters, the story also gives a glimpse of Emily’s father, the national climatic research center workers, as well as the animals trapped in the hurricane. Since the story includes so many points of view, Alejo and Emily are underdeveloped, which makes it hard for the reader to connect to them.

Storm Blown shows the devastation a hurricane can cause which leads to many daring episodes. However, some of the events are hard to believe. For example, Alejo, who does not know how to drive, is able to steal a van, drive through torrential rains, and arrive safely home. Alejo is so worried about his padrino that he braves the weather only to find an empty house. Although Alejo’s actions are brave, the reader will wonder why he and his padrino did not discuss a disaster plan. Instead, Alejo’s grandfather tapes a note to the kitchen table. In a world where natural disasters happen often, readers will question some of the kids’ daring deeds and actions.

Readers interested in extreme weather or survival stories will find Storm Blown difficult to read because of the many points of view and the challenging vocabulary. The story also ends abruptly and leaves the reader with too many unanswered questions. Instead of choosing Strom Blown, readers should try the I Survived series by Lauren Tarshis, The Raft by S.A. Bodeen, or Trapped by Michael Northrop.

“It was hard to imagine a time when the world would be healed again. But Padrino Nando was hopeful. Like the workers on the beach, there were people helping everywhere he looked.” –Storm Blown