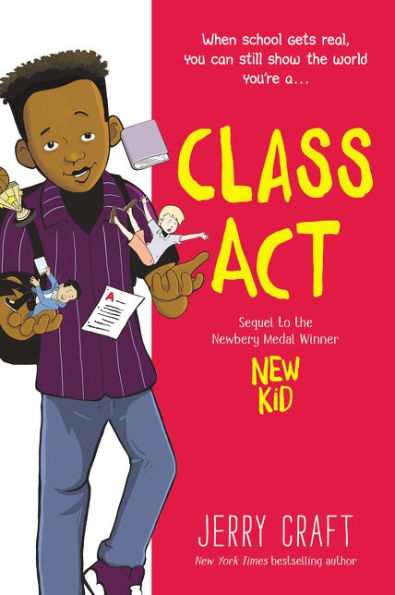 Eighth-grader Drew Ellis is no stranger to the saying, “You have to work twice as hard to be just as good.” His grandmother has told him that his entire life. But, lately, he’s been wondering: even if he works ten times as hard, will he ever have the same opportunities that his privileged classmates at the prestigious Riverdal Academy Day School take for granted?

To make matters worse, Drew begins to feel as if his good friend Liam might be one of those privileged kids. He wants to pretend like everything is fine, but it’s hard not to withdraw, and even their mutual friend, Jordan, doesn’t know how to keep the group together.

As the pressures mount, and he starts to feel more isolated than ever, will Drew find a way to bridge the divide so he and his friends can truly see and accept each other? And most important, will he finally be able to accept himself.

While the first installment focused on Jordan, Class Act focuses on Drew. Middle school readers will relate to Drew as he tries to navigate junior high and all of the pressure that comes with growing older. Going to Riverdal Academy is difficult because most of the students are white and the teachers have a difficult time discussing race. To make matters worse, the neighborhood kids tease Drew for acting as if he is better than them. In addition, Drew isn’t sure where he fits in. When discussing his confusion with a classmate, Drew’s friend asks him, “What good is having people like you if you don’t like you?”

In addition to regular middle school drama, Class Act gives many examples of classism. After Drew sees his friend Liam’s huge mansion, Drew is angry and begins avoiding Liam. Drew says, “People like him are never friends with people like us. We won’t live in the same neighborhood. We won’t eat the same food. Our kids won’t go to the same schools. So what’s the point?” In the end, Drew shows Liam his neighborhood, which helps the two understand and accept each other.

Class Act is an entertaining graphic novel that has brightly colored illustrations that are at times heartwarming and hilarious. Craft does an excellent job making the characters’ feelings clear by focusing on the character’s facial expressions. Even though the story focuses on Drew, Jordan’s artwork is still included as black and white illustrations. In the end, Class Act will entertain the reader as it touches on the difficult topics of classism and race. Readers who would like to read more about racial inequality and the Black Lives Matter movement should also read Blended by Sharon M. Draper.