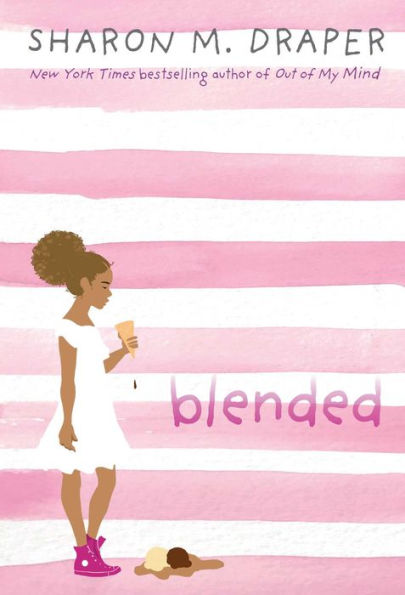 “I don’t want to sound like a Hallmark card or anything, but I think the only thing that gets rid of hate is love,” Isabella. –Blended

Eleven-year-old Isabella feels like she’s being pulled in two. Her divorced parents fight over everything! Her whole life is divided. Her time is divided between her parents—every other week, she has to change houses, change rules, change names, and even change identities.

Isabella’s father is black, and her mother is white. She isn’t sure where she fits. After all, if you’re only seen as half of this and half of that, how can you ever feel whole?

Each chapter of Blended jumps between Mom’s week, Dad’s week, and exchange day. This allows the reader to understand how her parents’ divorce affects Isabella’s daily life. While Isabella is trying to navigate between her two parents, she also has to deal with her parents’ live-in partners. The story portrays the headaches caused by squabbling parents and having two homes. In addition, having a white mom and a black father causes confusion. For example, Isabella isn’t sure how to fill out school forms. She tells her mom, “Well, I don’t answer ‘other,’ because that’s like being nothing, like maybe I could be Martian or something. I’m not nothing. I am something. I am somebody.”

Blended also explores racism—both the intentional and the unintentional. Several times throughout the story, someone says a hurtful comment about Isabella’s race; however, the speaker intended the comment to be a compliment. Equally important is the time Isabella spends in English; the class discusses recent school protests. Some students are hoping that “walking out of school can help change gun laws and stuff.” As part of an assignment, Isabella takes a poem written by an African American author and writes her own version of the poem. This allows the reader to further understand Isabella’s feelings.

The story hits on difficult topics of racism and identity confusion by focusing on Isabella, which allows the reader to understand her feelings. Middle-grade readers will relate to Isabella, who is trying to understand herself and the world around her. Blended deals with relevant conflicts in today’s world. One instance is when Isabella is shot by a police officer; the scene will evoke a strong emotional response because readers will understand Isabella’s fear, confusion, and pain. While the story shows an example of police brutality, it avoids excessive criticism of the police.

While Blended teaches important life lessons, the plot jumps from topic to topic and the parent drama becomes tedious. Despite this, the story is fast-paced and shows many perspectives. In the end, Isabella begins to understand the importance of speaking up. The story doesn’t end in with a cheerful, happy event. Instead, it acknowledges Isabella’s pain and her hope for a better future. Readers who would like to read more about racial inequality and the Black Lives Matter movement should also read A Good Kind of Trouble by Lisa Moore Ramée.

“I don’t want to sound like a Hallmark card or anything, but I think the only thing that gets rid of hate is love,” Isabella. –Blended