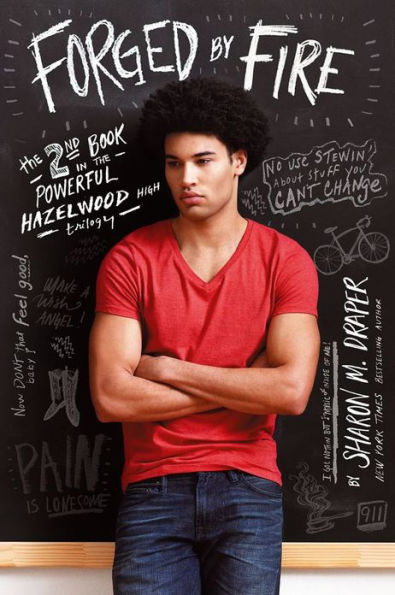 “Pain is lonesome. You gotta deal with it all alone,” Gerald. –Forged by Fire

Gerald’s mother, Monique, has always been unstable. When his mom goes to jail, Gerald goes to live with his Aunt Queen, who gives him a stable, loving home. After six years, Gerald’s mom returns. Gerald has no desire to spend time with Monique. When Aunt Queen dies, Gerald’s life dramatically changes.

Monique and her husband, Jordan, bring Gerald into a home filled with anger and abuse. Jordan, a brutal man, doesn’t hesitate to use his fists. The only bright spot in Gerald’s new home is his stepsister, Angel. Living in a home of misery and despair, Gerald tries his best to protect Angel. When Gerald learns that Jordan is sexually abusing Angel, he finally reaches out for help.

When Jordan is behind bars, Gerald hopes their lives will get better, but his substance-addicted mother rarely pays attention to her two kids. Drug, violence, and uncertainty surround Gerald and Angel. When Jordan gets out of jail, he says he has changed and Monique welcomes him back home. Gerald doesn’t trust Jordan, but is he strong enough to face Jordan’s anger and protect Angel?

Forged by Fire vividly paints a picture of the devastation caused by addiction and abuse. As a three-year-old, Gerald was already consumed with the fear and pain of living with a neglectful, abusive mother. After a fire that almost killed Gerald, his mother spends six years in jail. When Gerald is thrust back into an abusive home, his apathetic mother refuses to acknowledge the physical, sexual, and mental abuse that is a daily part of Gerald’s and Angel’s lives.

Gerald is an admirable character, who tries to keep his stepsister safe. Despite his best efforts, Gerald cannot always shield his sister from abuse. To make matters worse, both Gerald’s friends and the adults in his life fail him because they casually accept the abuse and provide little support. Instead, they act as if the abuse is just something that Gerald needs to deal with.

Forged by Fire vividly describes Gerald’s abuse, which allows the reader to feel Gerald’s despair. In a world surrounded by violence, the brutal details of Gerald’s life come into focus. Since the story accurately portrays an abusive home, some readers may be disturbed by the images of abuse. Even though the story is engaging, the conclusion hints that Gerald’s life will always be full of turmoil.

Gerald’s story will stay with readers for a long time. Even though readers will admire Gerald’s perseverance, the story ends with a hopeless tone. Readers are left wondering if any adult will step in and help Gerald and his sister. Without assistance, Gerald’s future will be grim.

Forged by Fire is the second installment in the Hazelwood High Trilogy; however, the story can be read as a stand-alone. The events from Tears of a Tiger are mentioned, but they do not have the same emotional impact as they did in the first book of the series. While the story will spark conversations, both Tears of a Tiger and Forged by Fire don’t offer solutions. While both stories are engaging, they describe situations in detail that will make readers uncomfortable. In the end, the Hazelwood High Trilogy is an engaging, easy-to-read series that tackles difficult topics that are relevant to teenagers.

“Pain is lonesome. You gotta deal with it all alone,” Gerald. –Forged by Fire