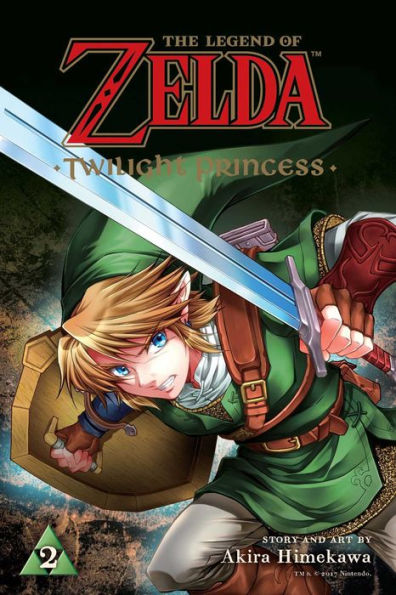 “Do not be afraid. I know that within this animal form beats a human heart,” Princess Zelda. —The Legend of Zelda: Twilight Princess Vol 2

When Link travels to the Twilight Realm to save Ilia, he is transformed into a wolf and is quickly captured. A Twilight imp named Minda takes a liking to Link and helps him escape. Minda introduces Link to Princess Zelda, who explains how the King of Shadows has cast the kingdom of Hyrule into perpetual twilight. The King of Shadows seeks to rule everything under the light and dark. Princess Zelda is powerless to stop him. She prays every day that the gods will save her people. Is Link the prayed-for hero?

But as a wolf, what can Link do? He can talk to animals in his wolf form, but he cannot communicate with his friends or wield a weapon. As Minda leads Link on a quest, it is unclear to readers and to Link himself whether Minda is helping Link save his people or tricking him for her own gain. While this graphic novel has more action than the first book, video gamers who have played Twilight Princess may become bored, as this graphic novel follows the game so closely that it begins to feel like a recap. For readers unfamiliar with the games, this installment may be more interesting.

Link is a relatable character that readers will root for, but the other characters in the story remain two-dimensional, leaving much to be desired. This story has several battle scenes scattered throughout, but there are only a few violent images where Link is shown slashing monsters with his sword or attacking in his wolf-form. The images are not gory. The theme of Twilight Princess Vol 2 follows Link’s struggle to find his inner strength in order to protect his loved ones.

Twilight Princess Vol 2 is darker than the video game. However, the story will appeal to reluctant readers because the Manga-style illustrations tell the story through pictures and uses a limited amount of words. Each page contains 1-6 simple sentences, which appear in thought bubbles. Similar to the original Batman comics, Twilight Princess’s battle scenes use onomatopoeia words, such as “Bwommm” and “gyaaah.” Overall, Link fans may be better off sticking with the video game and skipping the graphic novels altogether.

“Do not be afraid. I know that within this animal form beats a human heart,” Princess Zelda. —The Legend of Zelda: Twilight Princess Vol 2