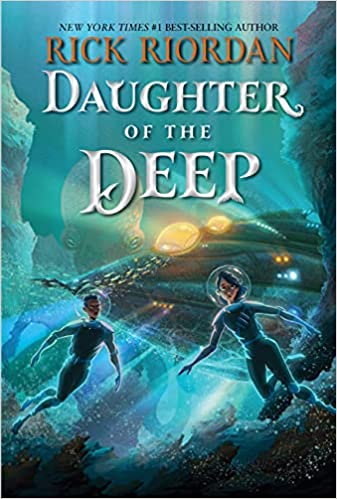 “I swallow the metallic taste of fear. I’ve just been made acting captain of a ship with a crew of twenty freshmen, a dog, a dolphin, and one comatose adult. I do not want the responsibility,” Ana. –Daughter of the Deep

Ana Dakkar is a freshman at Harding-Pencroft Academy, a five-year high school that graduates the best marine scientists, naval warriors, navigators, and underwater explorers in the world. Ana’s parents died while on a scientific expedition two years ago, and the only family she’s got left is her older brother, Dev, also a student at HP.

Ana’s freshman year culminates with the class’s weekend trial at sea, the details of which have been kept secret. She only hopes she has what it’ll take to succeed. All her worries are blown out of the water when, on the bus ride to the ship, Ana and her schoolmates witness a terrible tragedy that will change the trajectory of their lives.

But wait, there’s more. The professor accompanying them informs Ana that their rival school, Land Institute, and Harding-Pencroft have been fighting a cold war for a hundred and fifty years. Now, that cold war has been turned up to a full boil, and the freshman are in danger of becoming fish food.

In a race against deadly enemies, Ana will make amazing friends and astounding discoveries about her heritage as she puts her leadership skills to the test for the first time.

In Daughter of the Deep, the books 20,000 Leagues Under the Sea and The Mysterious Island written by Jules Verne are more factual than fictional. One of the teachers explains who the book’s characters are and where they fit into modern society. Ana also discovers that she is a descendant of Captain Nemo who “hated the great colonial powers. . . and had personal reasons to hate imperialism.” While introducing the above topic, both the Land Institute and Harding agree that “turning Nemo’s technology over to the world’s governments, or worse, the world’s corporations, would be disastrous.” Riordan repeatedly reminds readers of the danger of the world’s governments and corporations, who are more concerned with keeping their monopolies than helping citizens. This theme is not well-developed, and most teens will quickly forget these passages.

The story is told from Ana’s point of view. Even though she is the heroine, Ana is not portrayed as a perfect person. After her parents died, Ana dissociates; the narrative explains that Ana has talked to the school counselor regarding her grief. While Ana’s talk of her painful menstrual cycle makes her more relatable, the topic will make some younger readers uncomfortable. After the hostiles destroy Harding-Pencroft Academy, killing anyone on campus, Ana decides that the hostiles will be let free without any consequences. In the story’s conclusion, Ana unrealistically forgives the people who destroyed the school and then tried to kill her and her friends.

The story has a large group of characters who are both racially and religiously diverse. Plus, one character, Ester, has autism and needs an emotional support animal. However, even with readers paying close attention, the large cast of characters is difficult to keep track of. Daughter of the Deep has a unique premise, interesting characters, and fun technology; however, the story leaves the reader wondering if justice was served or if Ana’s opponents will just regroup and come back to continue their killing spree. Before jumping into Daughter of the Deep, readers who are intrigued by Jules Verne’s books should read the Max Tilt Series by Peter Lerangis.

“I swallow the metallic taste of fear. I’ve just been made acting captain of a ship with a crew of twenty freshmen, a dog, a dolphin, and one comatose adult. I do not want the responsibility,” Ana. –Daughter of the Deep