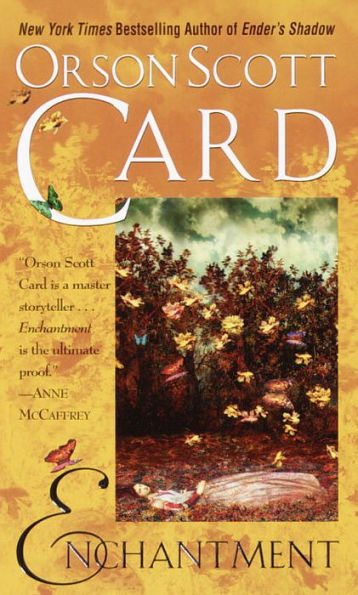 “Endurance, after all, was a kind of victory; a kind of heroism, too.” —Enchantment

As a child, Ivan stumbled across a slumbering princess in a forest clearing. Terrified by the beast that guarded her, he fled. But years later he is compelled to return by the need to determine if his princess was a childhood fantasy. Unfortunately for him, she was not.

Ivan is thrown into a world a thousand years in the past. Despite the fact that he is already engaged to a simple American girl, Ivan discovers that he is expected to marry the princess. If he fails to do so, the kingdom will become forfeit to the evil witch, Baba Yaga. However, Ivan must prove to himself and to the kingdom’s subjects that he truly is worthy of their princess.

Filled with culture, magic, and an interesting look into how modern people would fare in ancient times, Enchantment is a joy to read. However, some adult themes make this novel appropriate for a more mature audience than Card’s most famous book, Ender’s Game. Nevertheless, this is an intriguing story that will draw you in for an enjoyable tale.

“Endurance, after all, was a kind of victory; a kind of heroism, too.” —Enchantment