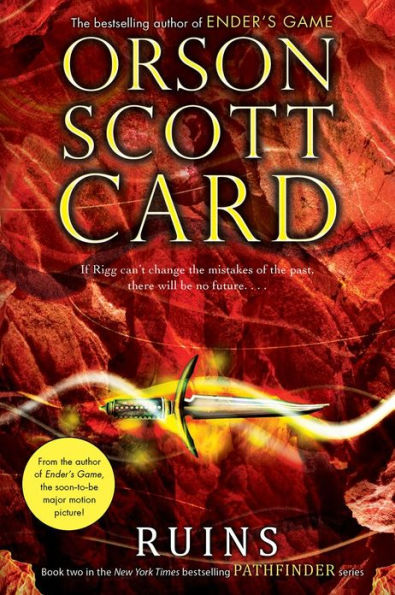 Rigg and Umbo have started to hone their time traveling skills—and just in time. They discover that in the not-so-far future Earth visits Garden with the intent to completely destroy Garden. Now the two boys race to figure out why their parent planet would destroy a colony they created. Something the Earthlings found on Garden horrified them, but what?

Garden cannot fend off these attackers, so Rigg will have to find the motive behind the attack and change the past to stop it from ever happening. As Rigg searches for answers, he travels through different wallfolds. One is extinct of all human life, another seemingly populated by poop-throwing yahoos and sentient mice, and in a third, the people have evolved to live in the sea. But wherever he goes, Rigg finds people who want to manipulate him. With no one willing to tell him the whole truth, how can Rigg decide which path to take?

The second installation in the Pathfinder series takes the story up a notch. By expanding Rigg’s world from one wallfold to four, the reader is shown several different paths the human race could have taken. The what if’s are tantalizing. The world Rigg explores is as interesting and exciting as the actions he takes. Ruins is in no way linear. Now that Rigg and Umbo are skilled time travelers, their paths jump forward, go backwards, and sometimes cease to exist entirely. While these time jumps may cause one to stop and ponder for a while, they are written in a way that is relatively easy to follow.