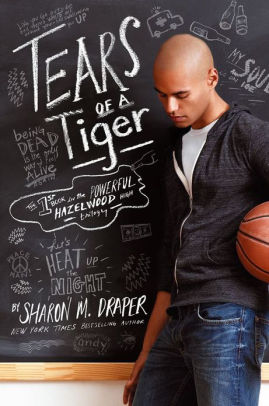 “That’s kiddie nightmares. I have grown-up nightmares about chemistry tests and dragon-breathing teachers and bein’ caught in a rich white neighborhood after midnight,” Andy. –Tears of a Tiger

Tears of a Tiger

After the basketball game, Andy and his friends just wanted to have a little fun. When they pile into Andy’s car and begin drinking beer, they think Andy’s swerving is funny. The fun ends when Andy plows into a wall, killing Rob, Andy’s best friend and the captain of the Hazelwood High Tigers. No one blames Andy for Rob’s death and soon everyone, except Andy, is moving on.

Andy is consumed with guilt. He can’t forget that one horrifying moment or the desperate screams of his friend’s last cries for help. Andy stops doing his school work. He begins acting out, but everyone thinks that Andy is fine – after all, he’s seeing a psychologist. Will Andy be able to move forward or will this one accident claim the futures of not one Tiger, but two?

Andy is consumed by guilt over Rob’s death. Even though he’s in pain, his friends, his family, and his psychologist think he needs to get over the guilt and get on with life. Andy’s psychologist tells him, “the answer is life, Andy, not death.” Andy begins acting out and crying for help. He thinks, “My heart is bloody, and my soul is on ice… Nobody cares.”

Tears of a Tiger tells the heart-wrenching story of Andy and his friends as they deal with Rob’s death. The story unfolds through conversations, English assignments, diary entries, and prayers. While these mediums give a unique perspective, at first the format is confusing. Through various mediums, the readers will come to understand Andy’s guilt, grief, and depression. Even though Andy desperately needs help, no one is there to bolster him up. In the end, the pain of losing Rob causes Andy to commit suicide.

Tears of a Tiger tackles some heavy topics such as death, depression, drinking and driving, as well as racism. The story will resonate with teenagers, especially those who have ever faced a difficult situation. Even though readers will understand the reasons Andy commits suicide, solutions are never discussed, which ends the story with a hopeless tone. The devastation of both Rob’s and Andy’s death will remain with readers for a long time. Tears of a Tiger is an engaging story that will leave readers questioning life and death, and they’ll be wondering if anything could have prevented Andy’s suicide.

“That’s kiddie nightmares. I have grown-up nightmares about chemistry tests and dragon-breathing teachers and bein’ caught in a rich white neighborhood after midnight,” Andy. –Tears of a Tiger