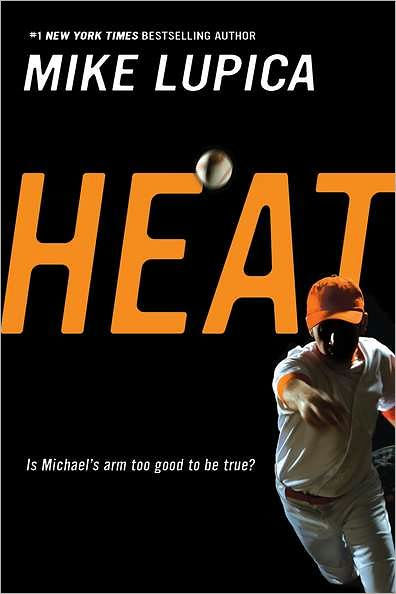 Michael didn't run anywhere. Nobody runs home to an empty apartment, he thought. Nobody runs to be alone. –Heat

Twelve-year-old Michael Arroya dreams of playing in the Little League World Series. His pitching arm has some serious heat, but so does his day-to-day life. Michael must pretend that everything is all right, even though his father has died, and his seventeen-year-old brother is trying to take care of their needs. Michael and his brother keep their father’s death a secret from almost everyone. But then a man from social services gets curious and begins asking questions. Fear fills Michael because he’s afraid if anyone finds out the truth he’ll be separated from his brother or sent back to Cuba.

To make matters worse, some of the coaches wonder how a twelve-year-old boy can throw with so much power. When the league demands a birth certificate, Michael becomes ineligible. With no birth certificate, no parent, and no way to prove his age, how will Michael be able to make his baseball dreams come true?

Heat is not just a book about baseball; it is a book about family, friendship, and never giving up on your dreams. The story integrates play-by-play baseball action, with the suspense of Michael’s home life and the secrets he is trying to keep. The relationships between Michael’s friend, Manny, and his brother, Carlos, add interest and heart to the story. Even though Michael’s father has died, his voice still rings through his sons’ memories. This allows the father to voice important life lessons to his sons even after his death.

The story deals with the difficult theme of losing a parent, maintaining secrets, and the struggles immigrant families face. Carlos struggles to become the man of the house and keep Michael focused on his dream. The characters’ conflict has just enough detail to add suspense to the story while staying kid-friendly. By watching the characters struggle, the reader will learn the importance of staying positive and never giving up. Heat is an easy-to-read story that will appeal to sports lovers. Because the story has a lot of play-by-play baseball action, this book will not appeal to those who do not enjoy sports.

Violence
• When a boy steals a purse from Mrs. Cora, she “hit the ground hard, rolled on her side, feeling dizzy. . .”
• Papi watched an argument and then, “he saw the man raise a hand to the woman, knock her down to the ground.” When Papi told the man to stop, the man, “took one swing before Papi put him down . . . The man got up, tried to charge Papi like a bull. But Papi put him down again.”
• A pitcher “went into his full wind-up and threw a fastball that hit Michael in the head.” The story implies the pitcher hit Michael on purpose.

Language
• One of the characters is referred to as “Justin the Jerk” throughout the story.
• When a pitcher throws a ball and hits Michael, someone says, “I can’t believe they didn’t throw that puss out of the game.”
• Michael’s friend calls him “jerkwad” and later a “jerkball.”

Spiritual Content
• Michael’s Papi told him that, “You cannot teach somebody to have an arm like yours . . . It’s something you are born with, a gift from the gods, like a singer’s voice.”
• When Michael has a baseball in his hand, he doesn’t “have a list of questions he wants to ask God.”
• Michael’s Papi would say, “If you only ask God ‘why’? when bad things happen, how come you don’t ask him the same questions about all the good?”
• Michael’s brother reminds him that, “Papi said if we had all the answers we wouldn’t have anything to ask God later.”
• Michael tells his friend to stop talking because “the baseball gods you’re always telling me about? They’re hanging on every word right now.”
• On the wall of the Yankee Stadium clubhouse a sign read, “I want to thank the Good Lord for making me a Yankee. Joe DiMaggio.”

Michael didn't run anywhere. Nobody runs home to an empty apartment, he thought. Nobody runs to be alone. –Heat