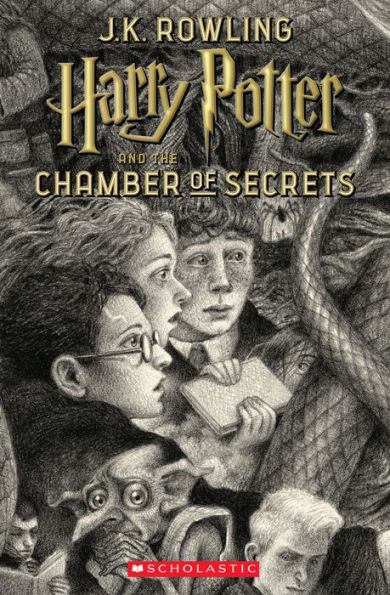 Harry Potter and the Chamber of Secrets

Harry cannot wait to return to Hogwarts for his second year of magical schooling. But a powerful force seems determined to keep him away. From a meddling house elf to a flying car, Harry’s fight to get to school nearly gets him expelled! When he finally gets to Hogwarts, it is with a warning that someone at the school wants Harry Potter dead.

Harry’s second year continues to go downhill, with a clueless Defense Against the Dark Arts teacher and a growing rivalry with Malfoy. Then, even worse, it is discovered that a monster is lurking in the castle. Students are being attacked, and Hogwarts is in danger of being closed—permanently. Can Harry discover what Slytherin’s monster is, with the help of Ron and Hermione? Or will Harry lose his new home and be forced to return to live the rest of his live with his horrible aunt and uncle?

The second installment of the Harry Potter series does not disappoint. The delightful cast from the first book is back, complemented by interesting new characters. The stakes have been raised, and the twisty plot will keep readers guessing at who—or what—is behind the mysterious attacks. Although the series revolves around magic, the story does not encourage children to try magic on their own. Spells involve simple words. For example, saying luminos creates light. The books advance throughout the series, becoming longer and slightly more mature, although still appropriate for elementary readers.

Another great book that will suck readers in, Harry Potter and the Chamber of Secrets is great for reluctant readers who are still developing a love for reading. There is also an illustrated version of this novel that will further engage reluctant readers with beautiful, full-page illustrations. Through Harry Potter’s experiences, readers will learn the importance of not jumping to conclusions about other people.