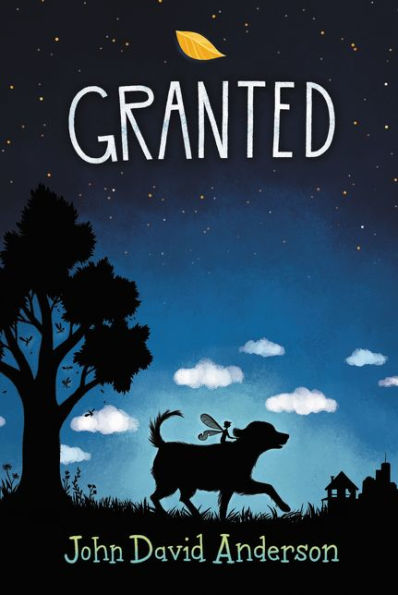 “You are broken and lost and I licked you, so now we are friends,” Dog. –Granted

Everyone who wishes upon a star, a candle, or a penny thrown into a fountain knows that you’re not allowed to tell anyone what you’ve wished for. But even so, rest assured there is someone out there who hears it.

Ophelia Delphinium Fidgets is no ordinary fairy—she is a Granter: one of the select few whose job it is to venture beyond the boundaries of the Haven and grant the wishes of unsuspecting humans every day. Ophelia has never traveled into the humans’ world to grant a wish. The fairies are low on magic, so they only grant a few wishes a day.

When Ophelia is given a wish to grant, she’s excited about the adventure. She has planned for everything. With her gear packed, Ophelia ventures out in search of the coin that was wished upon. Before she makes it to her destination, an airplane smacks her, injuring her wing. Unable to fly, Ophelia befriends a dog who promises to help Ophelia chase down the coin. Will Ophelia be able to grant the wish or will she fail at her mission?

The story starts out slowly with the author giving too much detail about the fairy world. Although some of the world-building is interesting, much of the description is on minute details that did not advance the story. Unfortunately, the story doesn’t get interesting until Ophelia meets a dog halfway through the book. The curious dog offers comic relief. One of the first things the dog says is, “so since I don’t know what you are I am hoping to sniff your butt. . . I will let you sniff mine, too.”

When Ophelia first sets out for her mission, she is overconfident and has problem after problem. After several negative encounters, Ophelia realizes that following rules and being perfect are not attributes to admire. After watching a human boy, Ophelia realizes that some wishes are more important to grant than others. When it comes time for Ophelia to grant one wish, she breaks a rule in order to bring a father back to his son.

Strong readers interested in fairy lore will have to wade through heavy descriptions in Granted. However, readers will be glad they continued reading. Ophelia and the dog’s interactions are heartwarming and hilarious. The conclusion is sweet and satisfying. The advanced vocabulary, detailed descriptions, and slow-moving plot will make Granted difficult for some readers. Readers who want a peek into the fairy world may want to read 13 Treasures by Michelle Harrison or The Spiderwick Chronicles by Holly Black and Tony DiTerlizzi instead.

“You are broken and lost and I licked you, so now we are friends,” Dog. –Granted