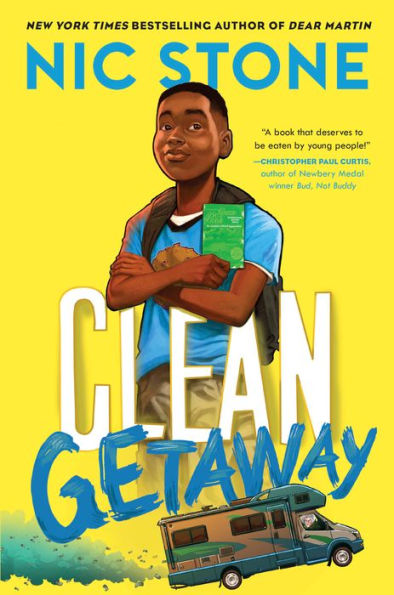 “You’re a good egg, Scoob-a-doob. Don’t ever let anyone tell you different. Thank you for your impeccable wingman service to this old lady on her final adventure.” G’ma. –Clean Getaway

For the life of him, William “Scoob” Lamar can’t seem to stay out of trouble—and now the run-ins at school have led to a lockdown at home. So, when G’ma, Scoob’s favorite person on Earth, asks him to go on an impromptu road trip, he’s in the RV faster than he can say “freedom.”

With G’ma’s old maps and a strange pamphlet called the Travelers’ Green Book at their side, the pair takes off on a journey down G’ma’s memory lane, but adventure quickly turns to uncertainty. G’ma keeps changing the license plate, dodging Scoob’s questions, and refusing to check Dad’s voicemails. The farther they go, the more Scoob realizes that the world hasn’t always been a welcoming place for kids like him, and things aren’t always what they seem—G’ma included.

While Scoob gets a glimpse of G’ma’s youth, the events are often disjointed and slightly confusing. During the trip, G’ma shares a secret that has been haunting her for the majority of her adult life. Soon after G’ma married her husband Jimmy, the two took off on a cross-country trip, hoping to end up in Mexico. As G’ma retraces her steps, Scoob is left wondering how all the pieces fit. When the reader finally learns G’mas secret, many of the facts just don’t make a lot of sense and there are many questions that are unanswered.

Most of the story’s action happened in the past, which makes the details less exciting and not well-developed. For example, G’ma stops at Medgar Evers’s house and tells Scoob about his death. Even though the events were tragic, the significance of Medgar’s life and death is lost because there is so little information about him. Instead of feeling like a well fleshed-out story, Clean Getaway brings up a topic and quickly moves on, leaving the reader with a list of people and events that lack historical significance.

Even though the story is disjointed, middle school readers will still enjoy the relationship between Scoob and G’ma. As they travel, Scoob gets a clearer picture of the difficulties that existed in the segregated south, especially for a biracial couple. Despite the great gains America has made, Scoob realizes how the past has helped shape his life.

Told from Scoob’s point of view, middle-grade readers will understand Scoob’s confused emotions and his anger at his father. When Scoob enters a state, a map of the state appears, which gives fun facts. The maps help the reader keep track of G’ma’s route as well as some of the important places the pair go to. Clean Getaway explores the difficult themes of racism, regret, and the complicated nature of humans. Black and white illustrations appear throughout the story, which will help the reader visualize the story’s events. As G’ma tells about her days of youth, readers see how G’ma’s choices have affected not only her son but also her grandson.

“You’re a good egg, Scoob-a-doob. Don’t ever let anyone tell you different. Thank you for your impeccable wingman service to this old lady on her final adventure.” G’ma. –Clean Getaway