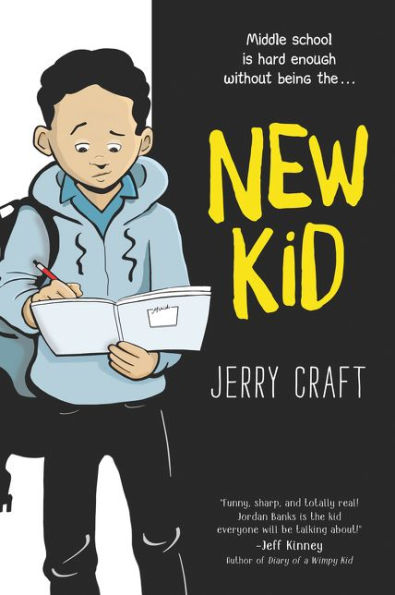 “My grandfather always says ‘never comfort someone with a lie,’” Jordan. –New Kid

Seventh-grader Jordan Banks loves drawing cartoons about his life. But instead of sending him to the art school of his dreams, his parents enroll him in a prestigious private school known for its academics, where Jordan is one of the few kids of color in his entire grade.

As he makes the daily trip from his Washington Heights apartment to the upscale Riverdale Academy Day School, Jordan soon finds himself torn between two worlds and not really fitting into either one. Can Jordan learn to navigate his new school culture while keeping his neighborhood friends and staying true to himself?

Jordan is an incredibly likable kid who struggles with fitting in at his new school where most of the students are affluent and white. Jordan’s experiences highlight the way privilege, bias, and racism affect people. New Kid tackles racism and colorism without feeling preachy; instead, Jordan and his friend Drew discuss how others treat them differently because they are African American. Both of the boys are frustrated that one of the white teachers doesn’t take the time to learn their names. When the teacher continues to get his name wrong, Jordan thinks it is worse than being called names because “They’re saying that you’re not even worth their time and are insignificant.”

Middle school readers will relate to Jordan’s struggles. Jordan wants to fit in at his new school, but he’s also afraid of losing his neighborhood friends. Readers will understand Jordan’s desire to be nice to a girl who is a bit odd, even though he doesn’t necessarily want to be her friend. Readers will be surprised by the caring way that Jordan solves the problem. Another positive aspect of the story is Jordan’s mother. She clearly loves Jordan, but sometimes her enthusiasm for hugs and taking pictures drives him crazy.

New Kid is an entertaining graphic novel that has brightly colored illustrations that are at times heartwarming and hilarious. Craft does an excellent job making the character’s feelings clear by focusing on the character’s facial expressions. Jordan’s artwork is shown in black and white illustrations, which highlights his feelings about a variety of topics, such as his mother’s picture taking, books written for African American kids, and his teacher. In the end, New Kid will entertain the reader and teach the importance of not judging others based on appearance as well as speaking up for what is right.

“My grandfather always says ‘never comfort someone with a lie,’” Jordan. –New Kid