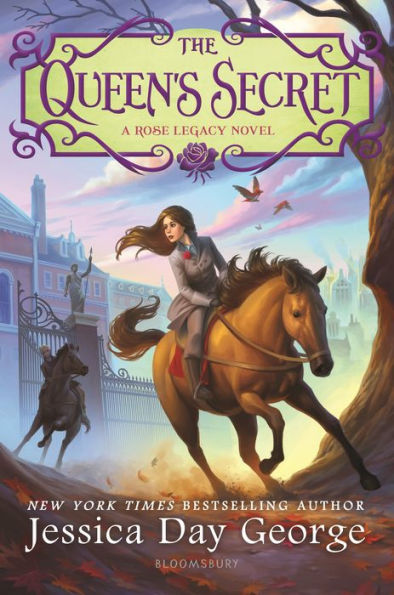 “It’s so much easier to have a conversation with you when you’re not having vapors every five minutes!” Jilly. –The Queen’s Secret

Horses have been banned in the country for centuries, and most people believe that horses were carriers of disease. Anthea and her family know the truth—horses are majestic creatures who can share their thoughts with people through the Way. The queen wants to reintroduce horses into the kingdom, but the king has demanded that horses and riders with the Way follow his every command.

When a deadly plague breaks out, people believe that horses are the cause. People’s fear of horses rises as more fall ill and the death toll increases. Anthea and her friends are asked to transport a lifesaving vaccine, but the people fear the medicine that can save their lives. To complicate matters, Anthea learns the queen’s secret—but will revealing the queen’s secret help or hurt their cause?

The second installment of The Rose Legacy series continues to focus on Anthea, who is an extremely likable and strong protagonist. The story introduces a group of all-female scientists that are struggling to understand the disease that is rapidly infecting people. Although the scientists discover a vaccine, the discovery comes because of a chance encounter instead of through their hard work and research. In the end, the story shows women in a variety of roles—the queen, mothers, young girls, and a villain.

Much of the plot revolves around the spread of the disease and people’s fear of both horses and vaccines. Although the plot takes an unexpected direction, the story is fast-paced, interesting, and enjoyable. The story highlights the dangers of allowing fear and misconceptions to overtake reason. Readers will appreciate seeing girls take action and face danger in order to help, even when others doubt their ability. Readers will be eager to read the next book in the series to find out why the villain has kidnapped horses and why the villain seems eager to start a war.

The Queen’s Secret is full of conspiracy theories and intrigue, but what makes the story even more enjoyable is the relationship between horses and their riders, as well as the friendships that Anthea makes. Jessica Day George creates a unique world that builds suspense without graphic violence, romance, or using cliché characters. Anyone who wants to read an engaging horse-related adventure should pick up the Rose Legacy series.

“It’s so much easier to have a conversation with you when you’re not having vapors every five minutes!” Jilly. –The Queen’s Secret