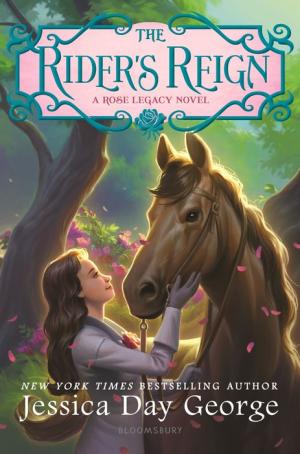 “The very idea that you could just waltz right into the private hunting lodge of the emperor of Kronenhof and steal a herd of horses and a hostage princess? Armed with what? Your wits, your cousin, a pair of handsome boys, and an owl?” Anthea’s mother. –The Rider’s Reign

Anthea and her friends arrive in Kronenhof on a mission. They have two weeks to find the missing Coronami princess—kidnapped by Anthea’s mother and taken to the neighboring land—before Coronam declares war. On top of that, Anthea’s mother has also captured the herd stallion and half a dozen more horses—enough to start her own herd in Kronenhof.

But navigating the court politics of a foreign country proves to be more difficult than Anthea imagined. Will Anthea and her companions be able to outmaneuver her mother, who has always been one stop ahead of them? And what should they do about the rumors of wild horses in Kronenhof’s forest?

The Rider’s Reign focuses less on the horses and more on political intrigue. However, in order to better understand the horse’s emotions, some chapters are told from a specific horse’s point of view. To distinguish the point of view, the horse’s name appears at the top of the chapter and these chapters have grey borders around the page. Anthea and her friends are trying to find the ghosts, a mysterious group of horses that hide in the forest. However, when the ghost horses are found, the scene feels anticlimactic and unimportant because nothing is revealed. Instead, Anthea has a short conversation with the horses and then slips back into the forest.

Anthea and her group travel to Kronenhof and meet some interesting new characters. The main villain, the emperor of Kronenhof, is underdeveloped and unrealistic. Everyone around him, including the two teens who he kidnapped, pretend that they are willing visitors, which makes no sense. Despite this, readers will enjoy the familiar faces of the characters. In addition, the story contains several surprises, and, in the end, the villains get what they deserve.

The Rose Legacy Trilogy has a unique premise that will appeal to readers who love horses. Readers will have to pay close attention to understand the political intrigue and the complicated plot. In addition, the large cast of characters may confuse some readers. While the concluding book, The Rider’s Reign, doesn’t tie up all the loose ends, the conclusion will satisfy middle-grade readers.

If you’re looking for a horse-related book with a strong female character, The Rose Legacy Trilogy will delight you. Anthea is a likable heroine, who is willing to make sacrifices in order to save her friends. Anthea has the strength to stand by her principles, care for the horses, and act when necessary. The Rose Legacy Trilogy is an entertaining series that readers of all ages will enjoy. Horse loving readers will also like the Riders of the Realm Trilogy by Jennifer Lynn Alvarez.

“The very idea that you could just waltz right into the private hunting lodge of the emperor of Kronenhof and steal a herd of horses and a hostage princess? Armed with what? Your wits, your cousin, a pair of handsome boys, and an owl?” Anthea’s mother. –The Rider’s Reign