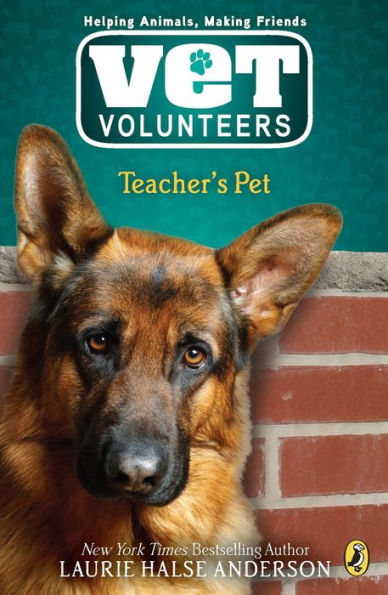 “Love is the strongest thing in the universe. It makes us do things we never thought possible,” Gram. –Teacher’s Pet

Twelve-year-old Maggie isn’t looking forward to starting middle school. She’s always had difficulties with her classwork and the thought of homework, pop quizzes, and adjusting to new teachers is frightening. So when Maggie enters Mr. Carlson’s science class, she’s excited to see a German Shepard and a counter full of small critters.

Maggie’s teacher, Mr. Carlson, recently lost his sight and he’s adjusting to having a guide dog named Scout. From the start, Maggie can tell that Mr. Carlson isn’t comfortable around Scout. Mr. Carlson has lots of experience with small animals—rats, gerbils, and rabbits—but he has never had a pet dog. Maggie offers to help Mr. Carlson with all of his animals. When Scout is hit by a car, Maggie wonders if Mr. Carlson’s companion will make it through the surgery.

Teacher’s Pet shows how changes in life can be difficult to deal with. Mr. Carlson, Scout, and Maggie are all dealing with a change in their life, which causes stress. The three help each other through their difficult times. Mr. Carlson and Maggie feel like giving up, but with each other’s encouragement, they both are able to “hold on tight” in order to overcome their challenges.

Maggie is a relatable character who loves animals, worries about her grades, and is often discouraged. Despite this, she readily helps Mr. Carlson care for his animals. As she gets to know Mr. Carlson and his dog, the reader will learn many interesting facts about blindness and guide dogs. The fast-paced story is the perfect mix of Maggie’s school life and her time at the veterinarian clinic.

Mr. Carlson is a welcomed addition to the story. Even though he is an adult, he isn’t portrayed as having all of the answers. While he is knowledgeable about science, he also second-guesses his ability to be a good match for Scout. Mr. Carlson shows how even adults need to be able to grow and adjust to life’s surprises. In addition, he’s admirable because he doesn’t let his disability stop him from teaching.

Unlike previous installments of the Vet Volunteer Series, Teacher’s Pet has a realistic, well-developed plot that seamlessly integrates facts into the story. Even though readers will learn about guide dogs, the information never feels like a lecture. The book ends with more information about raising a guide dog and a quiz that lets you know if you have puppy-raising potential. With short chapters, a high-interest topic, and relatable characters, Teacher’s Pet is the perfect addition to both elementary and middle schooler’s reading lists.

“Love is the strongest thing in the universe. It makes us do things we never thought possible,” Gram. –Teacher’s Pet