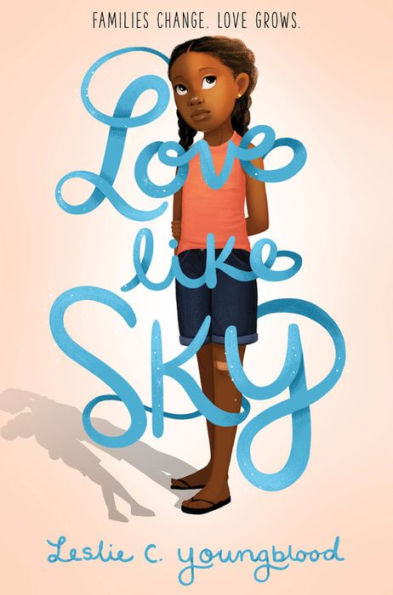 “Mama’s favorite play is A Raisin in the Sun. It says something about caring for people even more when they’ve made mistakes,” G-baby. –Love Like Sky

G-baby and her younger sister, Peaches, are still getting used to their “blended-up” family. They live with Mama and Frank out in the suburbs, and they haven’t seen their real daddy much since he married Millicent. G-baby misses her best friend back in Atlanta and is crushed that her glamorous new stepsister, Tangie, wants nothing to do with her.

G-baby is so preoccupied with earning Tangie’s approval that she isn’t there for her own litter sister when she needs her most. Peaches gets sick—really sick. Suddenly, Mama and Daddy are arguing like they did before the divorce, and even the doctors in the hospital don’t know how to help Peaches get better.

It’s up to G-baby to make things right. She knows Peaches can be strong again if she can only see that their family’s love for her is really like sky.

Youngblood creates a cast of realistic characters and tackles themes that are relevant. The story is told from G-baby’s point of view, and many readers will relate to G-baby’s difficulty figuring out how to navigate life in a blended family. G-baby has an array of feelings that often interfere with her ability to think logically. Instead, she is often overcome by anger and guilt. For instance, G-baby clearly loves her little sister, Peaches; however, when Peaches gets sick, G-baby feels guilty for not treating Peaches better.

Love Like Sky tackles many themes, including death, divorce, stepparents, racial inequality, peaceful protest, police brutality, growing up, and more. The story’s many themes are undeveloped and often do not feel like a natural part of the story. The story gives some examples of police brutality, but all of the events are relayed to G-baby. This allows the content to be appropriate for middle school readers. Love Like Sky’s many themes may spark readers’ interest in learning more about each topic.

The story’s main conflict is G-baby’s changing family. Throughout the story, G-baby discovers that even though her family may argue, they will always support each other to the best of their ability in the end. Despite the positive message, G-baby is not necessarily a likable character because she is sneaky, self-centered, and mean to those around her. When G-baby interacts with her best friend Nikki, the two spend so much time arguing, keeping secrets, and being snarky that it is difficult to understand why they are friends. Another negative aspect of the story is that Nikki, G-baby, and her stepsister all take unnecessary risks, like sneaking out of the house, that could have dire consequences. Instead of having to fess up to their parents, other people cover for their misbehavior.

Love Like Sky’s suspense revolves around G-baby’s conflict with her family and friends. While middle school readers will understand G-baby’s conflict, they may wish for more action. The story’s many topics and characters make Love Like Sky appropriate for strong readers. Readers interested in learning more about racial injustice should add A Good Kind of Trouble by Lisa Moore Ramée to their must-read list.  Caterpillar Summer by Gillian McDunn is perfect for readers looking for an entertaining story about family relationships.

“Mama’s favorite play is A Raisin in the Sun. It says something about caring for people even more when they’ve made mistakes,” G-baby. –Love Like Sky