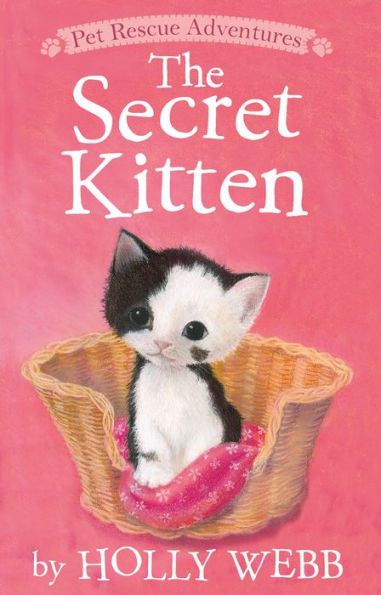 “Sometimes it’s hard when you really want to make friends—you make up stories. Little stories to make yourself sound more interesting. Everyone does it sometimes. . . But everyone gets caught, too, sweetie,” Grandma. –The Secret Kitten

Alicia and her family move in with their grandmother. But moving to a new home is hard for Alicia. Then, she finds some stray kittens in the alley and suddenly she doesn’t feel so lonely. She especially loves the shy black-and-white one, whom she names Catkin.

After Catkin’s brothers are adopted, Catkin runs away from the alley and Alicia sees her in the yard. She makes the kitten a new home in their greenhouse and feeds her pieces of sandwiches. But the kitten can’t stay forever. Alicia has to keep Catkin a secret because her grandmother doesn’t like pets. How will Alicia keep Catkin a secret?

The Secret Kitten focuses on Alicia, who is having a hard time making friends at her new school. Alicia’s walk home is a bright spot in her day because she gets to see the stray kittens. Even though the bakery owner feeds the kittens, a box in an alley is not an ideal home. When Catkin appears in Alicia’s yard, she reluctantly begins telling lies about the kitten. First, she lies to her grandmother, and then she lies to a girl at school. Alicia feels terrible about lying, but she wants to keep Catkin safe. Alicia’s moral dilemma is dealt with in a way that younger readers will understand.

While the story focuses on Alicia and the kitten, readers will also learn interesting cat facts as well. Part of the story is told from Catkin’s point of view, which allows the reader to understand why she is so shy. The Secret Kitten will purr-fectly entertain young readers. Black and white illustrations appear every one to four pages, which helps break up the text. Even though the story is appropriate for young readers, the vocabulary and sentence structure is more advanced.

Even though Catkin is the highlight of the story, the other characters are portrayed in a positive way. Alicia and her brother work together to create a safe home for Catkin. Alicia’s stern grandmother clearly cares about Alicia and her brother. Readers will appreciate how Alicia’s grandmother evolves throughout the story as well as how she puts Alicia’s needs first. The Secret Kitten has relatable conflicts, an adorable kitten, and a positive message about the importance of being honest. Readers who want more cat fun should read Pioneer Cat by William Hooks and Callie by Ellen Miles.

“Sometimes it’s hard when you really want to make friends—you make up stories. Little stories to make yourself sound more interesting. Everyone does it sometimes. . . But everyone gets caught, too, sweetie,” Grandma. –The Secret Kitten