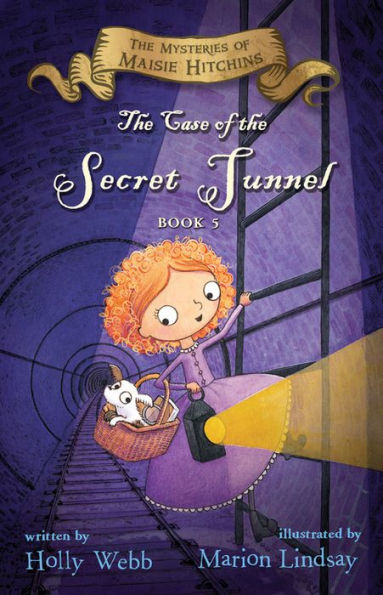 “Maisie kept a much closer eye on the new lodger. Instead of Mr. Grange being desperately boring, she began to think of him as mysterious.” –The Case of the Secret Tunnel

The Case of the Secret Tunnel

The Mysteries of Maisie Hitchins #5

When one of the boarders gets married, girl detective Maisie Hitchins is disappointed that her grandmother found a boring-looking man to replace the lady. Fred Grange claims to work as a clerk for a biscuit company, but he’s out and about on the London streets at odd hours, and Maisie soon discovers a list of stolen paintings hidden in his room. Maisie is determined to unmask him as a thief, but the truth is far more complicated—and dangerous. Before long, Maisie and her dog are led into a web of mystery lurking in the London Underground. Can Maisie solve the mystery before the thief strikes again?

Maisie is curious, daring, and has big dreams of being a detective. She uses her powers of observation to solve the mystery. During Maisie’s investigation, she finds many clues and the end of the story explains what Maisie learned from the clues. The plot is easy to understand and the conclusion doesn’t leave any loose threads or end in a cliffhanger. Some readers may need help understanding some of the vocabulary since Maisie and the other characters use old-fashioned vocabulary such as tuppence, wittering, deportment, and hobnobbing.

For the most part, Maisie wants to do what is right. However, she does sneak out of the house and isn’t always truthful. When Gran thinks Maisie is going across the street to see her friend, Maisie really goes to investigate the theft. Maisie justifies the lie because “detectives must bend the truth sometimes.” Another aspect that may upset parents is that the police officers are portrayed as incompetent. For example, Maisie easily finds clues that the police officer missed, and a boarder says police are “a useless lot.” Even though the police officer plays an important role in saving Maisie from the thief, he was incapable of solving the mystery.

The Case of the Secret Tunnel focuses on Maisie’s investigation which leads her on an interesting adventure. Black and white pictures that focus on the characters’ actions appear every two to four pages. The boarders and Maisie’s dog only make a slight appearance and their presence is missed. However, the story is fast-paced and will appeal to young mystery lovers. While the vocabulary may be difficult for some readers, the short chapters and non-scary plot make The Case of the Secret Tunnel a good bedtime story. Readers looking for a good mystery with another curious and brave girl as the main characters should read Kitty and the Moonlight Rescue by Paula Harrison.

“Maisie kept a much closer eye on the new lodger. Instead of Mr. Grange being desperately boring, she began to think of him as mysterious.” –The Case of the Secret Tunnel