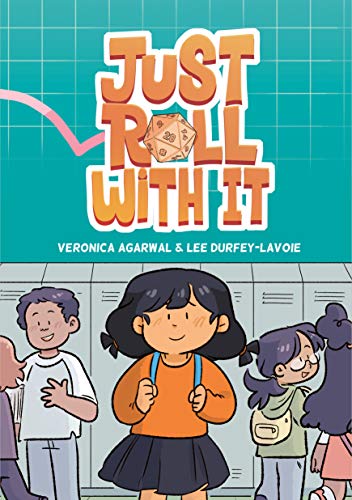 “My grandpa says, ‘When it’s hard to get through a tough time, you focus on the smaller things right in front of you,’” Clara. –Just Roll With It

As long as Maggie rolls the right number, nothing can go wrong…right?

Maggie just wants to get through her first year of middle school. But between finding the best after-school clubs, trying to make friends, and avoiding the rumored monster on school grounds, she’s having a tough time . . . so she might need a little help from her twenty-sided dice. But what happens if Maggie rolls the wrong number?

Maggie struggles with OCD and feels compelled to roll a dice before she makes any decisions. Soon, Maggie is rolling dice to decide if she should have lunch with a friend, if she should let a friend borrow a book, and other everyday decisions. Maggie’s OCD begins to interfere with her daily life. At the beginning of the story, the reader sees Maggie rolling the dice, but a lack of explanation makes the dice rolling confusing. However, later in the book, OCD is explained in kid-friendly terms that are relatable.

In English class, the students are reading The Crucible, which ties into Maggie’s life. For example, Maggie’s friend, Clara, says, “I think it must be really hard for Sara. She knows she’s not a witch, but when everyone is saying that kind of stuff to you, sometimes it’s hard to remember they are wrong.” Likewise, Maggie wonders if others think she is crazy, because of her OCD.

Maggie’s story unfolds with quick looks at different aspects of her life. While this allows Maggie to be well-developed, the constant change of scene may be confusing for some readers. In addition, part of Maggie’s emotions are shown when she talks to an imaginary dragon. The dragon doesn’t hesitate in making Maggie question her abilities. At one point the dragon tells her, “Every time you forget your homework, or are afraid to ask a question, and even when you’re not sure if you want seconds at dinner? That’s me, reminding you that you’re weak. You’re shy. You’re nothing.”

Just Roll With It has several positive aspects, including Maggie’s relationship with her family and her friend, Clara. Maggie’s sister encourages Maggie that “fear and pain can’t be avoided, no matter how much we try. Coming out to mom and dad was really scary for me. But I’m glad I did it. A lot of the worries I made up in my head ended up not coming true. So I put myself through a lot of heartache for nothing.” With her family’s reassurance, Maggie agrees to see a therapist in order to deal with anxiety. Middle grade readers will relate to Maggie who worries about what other people say about her, forgets to do her homework, and struggles with figuring out what clubs she wants to join.

Maggie’s story comes to life in brightly colored panels. When Maggie is feeling stressed, the pictures use a darker hue to illustrate her anxiety. The illustrations mostly focus on Maggie, her friends, and her family. When Maggie is at school, the students are a diverse group including a girl in a wheelchair and a Muslim. The story also includes Clara’s two moms and Maggie’s sister’s girlfriend. Reluctant readers will enjoy Just Roll With It because it uses easy vocabulary and has a fast pace. Each page has one to seven simple sentences, which make Just Roll With a quick book to read. Readers interested in exploring the theme of anxiety should also read the graphic novel, Guts by Raina Telgemeie.

“My grandpa says, ‘When it’s hard to get through a tough time, you focus on the smaller things right in front of you,’” Clara. –Just Roll With It