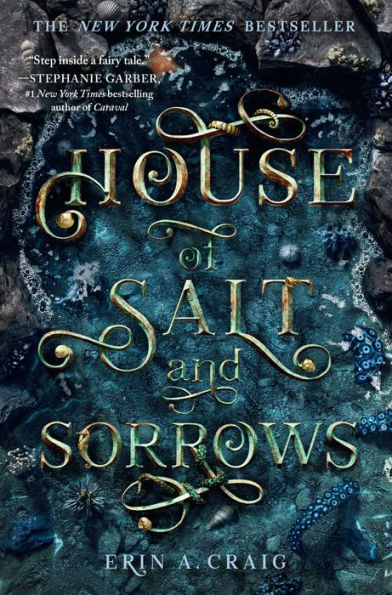 “Whether there is or isn’t a curse, people believe in it. We’ve been tried and found guilty in the public’s opinion. Nothing will change their minds, no matter how many pretty parties Papa throws. We’re cursed, and no one will ever believe otherwise,” Camille. –House of Salt and Sorrows

House of Salt and Sorrows

by Erin A. Craig

Annaleigh Thaumas was once one of twelve sisters, but four of them have gone to an early grave. After burying four sisters who were lost to various circumstances—the plague, a freak accident, a suicide, and falling from a cliff—the townspeople start to whisper that the Thaumas girls are cursed. Despite a large estate and a grand coming out party, no one is interested in courting the sisters, even though five of them are already of age. Despairing of ever finding a match, the sisters stumble upon a magic door used by the god Pontus. It will take them anywhere they desire, and soon the girls are wishing themselves to a new ball every night, hoping desperately to find a suitor from far away who hasn’t yet heard a rumor of the cursed Thaumas sisters.

But Annaleigh starts to wonder if there is something sinister behind her sister’s deaths. As she tries to discover what happened the night her sister fell from the cliffs, she discovers that she was pushed. Someone murdered her, and they might be coming after the rest of them. Haunted by horrifying visions, Annaleigh doesn’t know if the ghosts of her dead sisters are trying to warn her, if they’re angry with her, or if she is simply going mad. As the hauntings escalate, Annaleigh becomes desperate for answers. When she meets a handsome man named Cassius, who seems perfect and wants to help, Annaleigh falls for him instantly but doesn’t know if she trusts him. And even worse—can she trust herself?

House of Salt and Sorrows is a delightful tale of magic and wonder. Erin A. Craig paints vivid pictures of fairy shoes and magical balls and does a skilled job developing a wide cast of characters. While the number of sisters can be hard to keep track of at the beginning, the Thaumas family takes readers on a fun adventure that is worth the ride. There are some inconsistencies and implausible occurrences at the beginning of the book that might turn off more advanced readers, but most of them are actually resolved by the end of the book. While a magical story, there are disturbing images in the second half of the book when the Harbinger of Madness and Nightmares starts tormenting Annaleigh. House of Salt and Sorrows is sure to enchant readers who are brave enough to stomach the more graphic images without having nightmares.

“Whether there is or isn’t a curse, people believe in it. We’ve been tried and found guilty in the public’s opinion. Nothing will change their minds, no matter how many pretty parties Papa throws. We’re cursed, and no one will ever believe otherwise,” Camille. –House of Salt and Sorrows