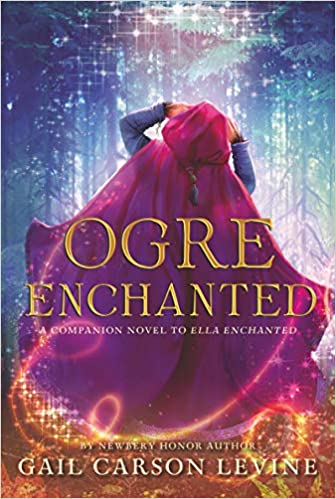 “When I rejoined humanity, I might save someone whose gratitude would progress to love. Then, if I could set aside the memory of Master Peter, I might return the feeling, because saving someone’s life was almost as good as drinking a love potion,” Evie. –Ogre Enchanted

Evie is content when she is treating people, diagnosing symptoms, and prescribing medications, with the help of her dedicated friend, Wormy. So, when Wormy unexpectedly proposes to her, she kindly declines his offer. She has too much to do as a healer. And besides, she doesn’t think of him as anything more than a friend.

However, a fairy named Lucinda had been listening in on their conversation, and she doesn’t approve of Evie’s rejection. Suddenly, Evie finds herself changed from a girl into an ugly, hungry ogre. Evie now has sixty-two days to accept another proposal, or else she will be stuck as an ogre forever. But Evie doesn’t forget her human side.

The close first-person style narrative allows the reader to better empathize with Evie and see how Evie navigates being an ogre. On her travels, Evie deals with the prejudices that humans have towards ogres. Out of fear, most humans attack her or run away from her, unaware that she is a human. For instance, when she returned from treating a patient, the villagers in her hometown attacked her. But Evie also meets people that accept her for who she is on the inside and do not care about her looks. These experiences remind Evie that she needs to take more consideration for people’s thoughts and not evaluate them solely on their physical appearance, afflictions, or first impressions.

Ogre Enchanted is a fun, delightful book that takes inspiration from the Beauty and the Beast fairy tale. The story explores love, particularly romantic love. Several times, Evie thinks someone makes her “tingle” due to her inexperience with romantic feelings. Equally as important is Evie’s time spent with her potential suitors. For example, the merchant Peter wants to marry a noblewoman and isn’t romantically interested in her. He confesses that he “was fond of her family’s position and [her family’s] money” and “[he] made her love [him].” This example teaches that there are people who would choose their romantic partner based on attributes such as social status or wealth and then undervalue the romance in their relationship. Interactions such as these will help readers not only understand the concept of falling in love but also to see what people think about romantic relationships in general.

If you like fairy tales and stories about romance, then grab a copy of Ogre Enchanted. The story has an interesting take on different views of romantic relationships. Readers will learn lessons about love and compassion as well as the difference between romantic love and platonic love. The story’s romantic aspects lean more towards puppy love than ardor, making the story good for middle-grade readers.

The implementation of aspects of the Beauty and the Beast fairy tale, such as Evie’s transformation into a beastly, hideous creature, help highlight many characters’ tendency to judge others based on appearances. Readers will be eagerly flipping the pages to see how Evie finds the one person that accepts her for who she is and proposes to her. Evie quickly becomes comfortable with falling in love, despite her staunch opposition to romance. The external pressure of a proposal makes it hard to believe that Evie would have loved someone romantically had it not been for Lucinda’s intervention. Nonetheless, the topics of love and romance as well as the implementation of a well-known fairy tale makes this story a good introduction to relationships and the fantasy genre.

“When I rejoined humanity, I might save someone whose gratitude would progress to love. Then, if I could set aside the memory of Master Peter, I might return the feeling, because saving someone’s life was almost as good as drinking a love potion,” Evie. –Ogre Enchanted