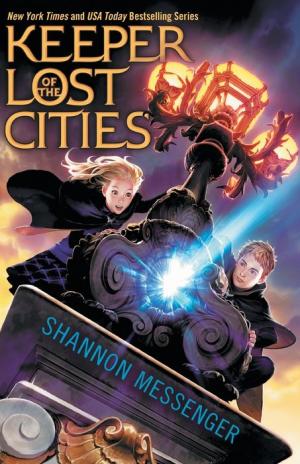 “I want you to promise you will just be a normal, happy thirteen-year-old girl. Go to school. Make friends. Get crushes on boys. Have fun. No more worrying about secret messages or plots or rebellions. Leave that to boring grown-ups like me,” Aldin. –Keeper of the Lost Cities

Keeper of the Lost Cities #1

Twelve-year-old Sophie Foster has a secret. She is a telepath with the ability to hear the thoughts of everyone around her—something that she’s never known how to explain, and has made her an outcast even in her own family. But everything changes the day she meets Fitz, a mysterious boy who appears out of nowhere and can also read minds. She discovers there’s somewhere she does belong, and that staying with her family will only put her in grave danger. In the blink of an eye, Sophie is forced to leave everything behind and start a new life in a place very different from her own.

Sophie has new rules and skills to learn, and not everyone is thrilled with her “homecoming.” There are secrets buried deep in Sophie’s memory, secrets that other people desperately want. Secrets they might even kill for. . .

Keepers of the Lost Cities is a fast-paced adventure that will keep readers on the edge of their seats. Sophie is thrown into the elven world, where she struggles to understand the events around her. Sophie worries about her human family and the intense fires that are raging in the human world. The adults in Sophie’s world don’t want to share valuable information about the fires that are affecting the human world. Despite being told not to worry, Sophie doesn’t stop investigating. However, it soon becomes clear that someone is trying to manipulate Sophie. But who?

Like Sophie, readers will be amazed by the elven world and find wonder around every corner. Besides learning new abilities, Sophie is also surrounded by interesting characters. Even though there are a lot of characters to keep track of, each person is unique and easy to remember. While there are several cute boys that make Sophie blush, Sophie has no romantic feelings for anyone.

Keeper of the Lost Cities has a sweet conclusion but does not resolve all the conflicts. Messenger draws the reader into Sophie’s life and the mystery surrounding her while leaving a lot of unanswered questions that will have the readers reaching for the next book in the series, Exile. Even though Keeper of the Lost Cities is geared towards middle school readers, the plot focuses on universal feelings that readers of all ages can relate to.

Anyone who has ever felt out of place will relate to Sophie, but the true gem in Keeper of the Lost Cities is the unique world and the host of interesting characters. The story has unexpected pockets of humor, such as when the healer tells Sophie that the medicine she needs isn’t so bad and he’s thankful he doesn’t “have to use the yeti pee balm.” Another positive aspect of the story is the full page black and white illustrations scattered throughout the book.

If you’re looking for a fun series that will engage middle school readers, Keeper of the Lost Cities and its sequels need to be on your child’s reading list.

“I want you to promise you will just be a normal, happy thirteen-year-old girl. Go to school. Make friends. Get crushes on boys. Have fun. No more worrying about secret messages or plots or rebellions. Leave that to boring grown-ups like me,” Aldin. –Keeper of the Lost Cities