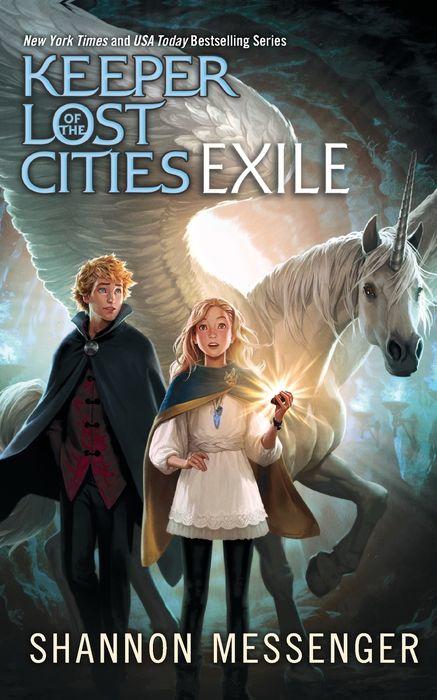 “Guilt is a treacherous thing. It creeps in slowly, breaking you down bit by bit,” Tiergan. –Exile

Keeper of the Lost Cities #2

Sophie is settling in nicely to her new home and her new life in the world of the lost cities. And it helps that living at Havenfield means getting to spend time with rare, precious species—including the first female Alicorn– who shows herself to Sophie and trusts only her.

Sophie is tasked with helping to train the magical creature so that the Alicorn can be revealed to the people of the lost cities as a sign of hope. Sophie wants to believe that the recent drama and anguish are gone for good.

But the secrets buried deep in Sophie’s memories remain, and before long, she’s back in incredible danger, risking everything to find the answers to questions that could save not only her life but the life of someone close to her…

From the first page, Exile jumps into action and takes the reader on an adventure through the elf’s world. The story focuses on the mystery of the Black Swan and Sophie’s unique talents—telepathy, teleportation, understanding all languages, and being able to perform a brain push. The intrigue around Sophie’s beginnings adds danger, suspense, and mystery. The moments between Sophie and her friends also give the story added depth as well as blush-worthy awkward boy scenes. As the narrator, Sophie draws the reader into her life and highlights the dangers of guilt. One councilman tells Sophie, “Guilt is a treacherous thing. It creeps in slowly, breaking you down bit by bit.”

Exile is extremely entertaining, but the complicated plot, the large cast of characters, and the political intrigue make Exile more suitable for strong, middle school readers. Scenes between Sophie and a high-maintenance unicorn add humor and glitter to the story. Sophie’s friends—who don’t always get along with each other—give the story heart. The heartwarming conclusion leaves several questions left unanswered, which will have readers reaching for the next book in the series, Everblaze. However, readers should be warned, Sophie’s adventures will draw you into the action and leave you wanting to read every book in the series, which has 8.5 books (and counting).

“Guilt is a treacherous thing. It creeps in slowly, breaking you down bit by bit,” Tiergan. –Exile