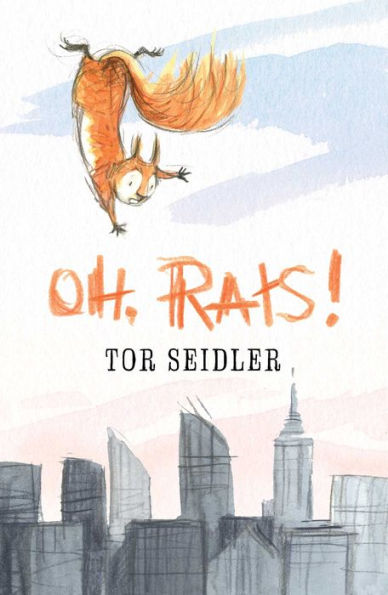 “Saving lives seems to be something you’re good at, Phoenix,” Beckett. –Oh, Rats!

Phoenix has always been lucky: he’s the largest in his litter, he has the most lustrous fur, and he’s the most sought-after squirrel in his part of New Jersey. All of this makes him being kidnapped by a hawk seem all the more unlucky.

Luckily, the hawk doesn’t have the best grip; however, he drops Phoenix on a freshly tarred street in downtown Manhattan. Stripped of his gorgeous golden-brown coat, Phoenix now looks like . . . like . . . a common sewer rat! Enormously unlucky!

But his luck changes once again when it isn’t sewer rats that find him, but rather Lucy and Beckett, wharf rats living in an abandoned pier on the Hudson River. Just as Phoenix starts to adjust to city life, the rats discover that humans (an unobservant and furless species) plan to tear down the pier and build a tennis complex. Can Phoenix save his new friends’ home? Or has his luck finally run out?

At first, Phoenix is a vain rat who wants to win Giselle’s attention. As Phoenix is admiring his reflection in a pond, a red-tail hawk grabs him. The hawk eventually drops him over Manhattan. Two rats, Lucy and Beckett, drag Phoenix back to their crate and nurse him back to health. After Phoenix sees his battered reflection, he stops eating in the hopes that he will die. However, he soon is caught up in the plight of the rats, whose home is about to be demolished. The rats decide to sabotage an electrical substation to stop the gentrification of their pier.

The rats’ diverse community has many characters that are interesting and well-developed. Phoenix has to overcome his dislike of rats and learn to appreciate of his own looks. Beckett, a bookish rat, would rather hide in his crate reading than join the other rats swimming. The red-tail hawk adds humor. However, the rats’ world also has several villains that also add interest to the story.

Oh, Rats! has some exciting moments, but the plot drags in many places. The focus on Lucy and Beckett’s alcoholic father seems out of place because his appearance does nothing to advance the plot. Although readers may find the rats’ way of life interesting, readers may struggle with the vocabulary. The story uses difficult vocabulary such as ignominious, appalled, piqued, lugubrious, and curmudgeonly. However, black and white illustrations appear occasionally, which helps break up the text.

Phoenix is a relatable character, who has a mix of good luck and bad luck. In the end, Phoenix realizes that friendship is more important than one’s looks. Even though Phoenix’s story is interesting, many readers will have a difficult time wading through the slow plot and difficult vocabulary. With a vast selection of animal books out there, Oh Rats! may be best left on the library shelf.

“Saving lives seems to be something you’re good at, Phoenix,” Beckett. –Oh, Rats!