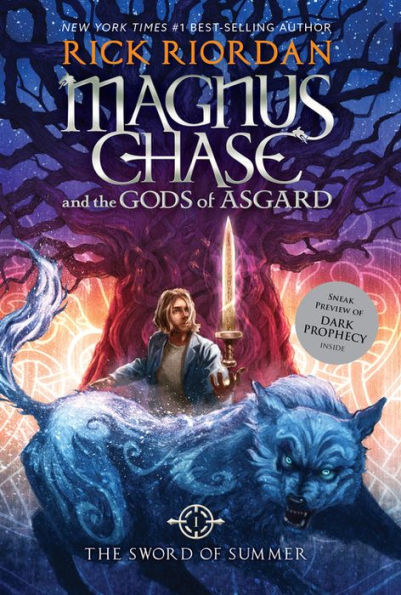 “Myths are simply stories about truths we've forgotten,” Frey.        —The Sword of Summer

The Sword of Summer

Magnus Chase and the Gods of Asgard #1

Magnus Chase isn’t your average 16-year-old kid. After a terrible incident that killed his mother, Magnus was forced to survive on the harsh streets of Boston for two years. Then everything changes, and not necessarily for the better when Magnus discovers the truth about his parentage. This knowledge is dangerous, and after attempting to outmaneuver his suspicious Uncle Randolph, Magnus lands in more trouble than he ever has before.

Escaping who he believes to be evil, Magnus falls into the hands of his worst enemy, a fire giant named Surt. Magnus dies and his soul is sent to Valhalla, the hall of warriors who will fight with Odin during Ragnarok (the end of the world). This is the beginning of an unlikely story of emotional growth, the development of strength, and the family found in friendship.

Fans of Rick Riordan’s previous works will be pleased as they travel into a fascinating world of Norse mythology. A character from the beloved Percy Jackson and the Olympians series even makes a cameo, making a fun crossover between magical worlds.

This family-friendly adventure is an exciting ride throughout. The characters are well developed and believable, but the sheer amount of characters may become confusing for less attentive readers. Nevertheless, even the timidest readers will enjoy this story as it is filled with well-placed humor. The plot is action-packed, leaving readers excited to turn the next page.

Although this book is entertaining and amusing, there are battles with monsters throughout the book that may upset some readers. The battles are not told in gory detail, but characters are injured and must deal with the consequences of their battles. Ultimately, Magnus Chase and the Gods of Asgard: The Sword of Summer is a delightful read full of humor, action, and magic.

“Myths are simply stories about truths we've forgotten,” Frey.        —The Sword of Summer