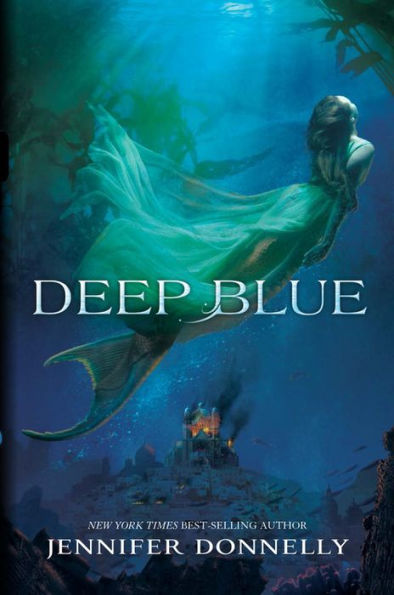 “Whatever you do or dream you can do—begin it. Boldness has genius and power and magic in it,” Vrăja. –Deep Blue

Serafina has always known that she will eventually rule her nation, located deep in the Mediterranean Sea. She needs to prepare for her Dokimí, when she will be introduced to the Mer people as their future ruler and will announce her future husband. But rather than worrying about her Dokimí, Serafina is obsessed with the strange dreams of sea witches that have been haunting her.

Everything changes when, during her Dokimí, a poisoned assassin’s arrow strikes her mother, and her father is killed. Now, Serafina must embark on a quest to find the assassin’s master and prevent a war between the Mer nations. Along the way, Seraphina will meet five other mermaids; will the six mermaids be able to discover who is behind the conspiracy that threatens the Mer world?

Many readers will pick up Deep Blue because of the beautiful cover image of a mermaid; however, the story is not as intriguing as the cover photo. The mermaid world has a complicated history and a confusing number of characters (both gods, humans, and mermaids). Much of the mermaid world is mundanely similar to the human world and there are overly long descriptions of clothing. Another negative aspect of the story is the main character Serafina, as her character is inconsistent. In some scenes, she is fearful and runs from danger. Other times Serafina shows bravery, but that bravery makes her make stupid choices that endanger others. Serafina never takes the advice of more knowledgeable mermaids, even when she should.

In the end, Deep Blue is a typical story about a beautiful princess who loses everything including her parents. She takes a difficult journey, which teaches her some important lessons. Serafina must learn not to believe other people’s cruel remarks and that everyone makes mistakes. She also must overcome fear. Vrăja tells her, “You fear you will fail at the very thing you were born for. And your fear torments you, so you try to swim away from it. Instead of shunning your fear, you must let it speak and listen carefully to what it’s trying to tell you. It will give you good counsel.”

Even though the story has some positive messages, Deep Blue will leave readers slightly confused, disappointed, and wondering why anyone would want the whiny Serafina to rule their realm. Readers looking for a good mermaid book may want to try Atlantia by Ally Condie instead.

“Whatever you do or dream you can do—begin it. Boldness has genius and power and magic in it,” Vrăja. –Deep Blue