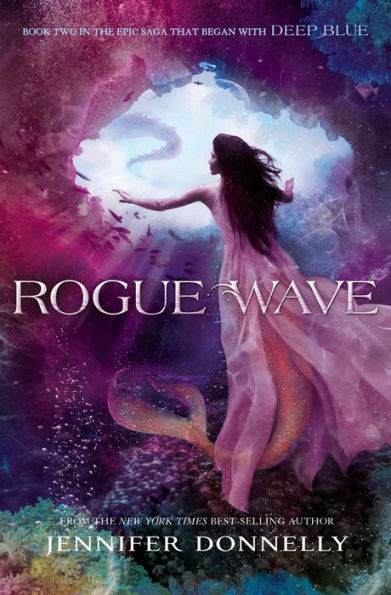 “Instead of shunning your fear, you must let it speak,” Vrăja. –Rough Wave

Four thousand years ago an ancient evil destroyed Atlantis. This evil is stirring again, and it will take six mermaids—Serafina, Neela, Ling, Ava, Becca, and Astrid—to defeat it. The mermaids are descendants of the Six Who Ruled—powerful mages who once governed Atlantis. In order to defeat this evil, the mermaids must find the magical talismans that belonged to the six.

Serafina mourns the loss of her betrothed—the traitor who is working for the man who destroyed her realm. But Serafina doesn’t have time to mourn; she must research the location of the talisman and discover its hidden location before anyone else can. While following leads, she must avoid death riders, who have been ordered to capture her.

Neela travels to her home realm, Matali, to warn her parents of the impending danger. However, her parents don’t believe her outlandish story and confine her to her chamber so she can rest and recover. Neela needs to escape so she can find a talisman, which is in the possession of the fierce razor mouth dragons. As they hunt for the talismans, both Serafina and Neela need to rely on courage, cunning, and their allies. Can they endure danger, defeat death, and discover the secret locations of the talismans?

Rogue Wave, the second book in the Waterfire Saga, is full of action, intrigue, and a hint of romance. Even though the first book, Deep Blue, focuses on bringing the six mermaids together, none of the mermaids work together in the second book. Instead, Rogue Wave jumps back and forth between Serafina and Neela, as they both look for a talisman. Often one mermaid’s experience would end with a cliffhanger, and then jump to the other mermaid’s story.

Despite the interesting mermaid world, many of the events were extremely unrealistic. One minute Serafina is a strong, brave girl ready to face down evil, and the next minute, she makes rash decisions that make no sense. Instead of connecting with Serafina, some readers may find the whinny, impulsive mermaid hard to relate to. On the other hand, many readers will relate to Neela, who tries to cope with difficulties with eating sweets. Neela’s parents are more concerned with Neela’s appearance than anything else. Neela has been taught that as royalty, she must always look pretty wearing jewels. Readers will root for Neela as she tries to break out of her parents’ mold.

Rogue Wave continues the intrigue that began in book one. As Serafina travels looking for the talisman, she meets an interesting Spanish princess and is reunited with her betrothed. Serafina hopes to defeat evil and help her realm; however, she is unwilling to accept the obvious and naively ignores clues that prove some people plotted against her mother. Younger readers may enjoy the mermaid world and the intrigue, but more advanced readers will have a difficult time believing Serafina can become a strong leader. The conclusion of Rogue Wave reveals an important plot twist, and readers will want to read the third book in the series, Dark Tide, to discover how the other mermaids fit into the complicated plan of saving the mermaid realm.

“Instead of shunning your fear, you must let it speak,” Vrăja. –Rough Wave