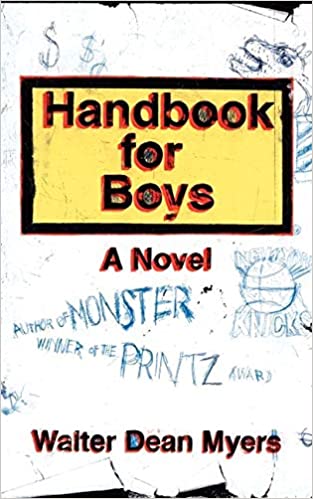 “Nobody talks about that stuff except you guys. They don’t even talk about all this stuff in school,” Jimmy. –Handbook for Boys

After a fight with another student, sixteen-year-old Jimmy is charged with assault, a crime that would normally get him six months in juvenile detention. But the judge offers him an alternative: a six-month community mentoring program run by a man named Duke Wilson. On the judge’s request, Jimmy begins working at Duke’s barbershop. There, he and another student named Kevin meet Duke’s “old guy” friends, who have a lot to say about life.

At first, Jimmy finds his time at the barbershop unbearable. Duke and his friends frequently tease Jimmy, and each new customer prompts them to launch into a philosophical conversation relating to Duke’s “rules of life.” Gradually, Jimmy begins to warm up to Duke and his friends. Despite his skepticism about their rules, Jimmy continually sees Duke’s wisdom about making choices reflected in other parts of his life. Eventually, Jimmy must grapple with his friend Kevin’s choices that lead to Kevin’s arrest for drug possession.

A major theme in Handbook for Boys is intergenerational differences. Jimmy and Kevin are teenagers, while the men at the barbershop are repeatedly described as “old guys.” The novel is told from Jimmy’s perspective and, as a result, readers may be sympathetic to Jimmy’s concern that Duke can’t “understand what it is to be young now.” The rift that this creates is frequently commented on. Jimmy initially finds Duke’s advice to be judgmental, but he comes to accept much of it in the latter half of the book.

Another prominent theme is the role of agency in everyday life. Duke and his friends firmly believe that people decide their own fate and are therefore always responsible for what happens to them. In fact, this belief is central to Duke’s philosophy. Jimmy initially disagrees. When Duke first posits his “pull yourself up by the bootstraps” mentality to him, Jimmy says, “Anybody can make a mistake, but you figure everybody should be perfect. You’re not even perfect.” Jimmy pushes back in similar ways at various points in the story, but he also seems to internalize Duke’s worldview.

Jimmy’s empathy makes him a likable character, and readers who often butt heads with respected elders may find him relatable. But even though the story is written through Jimmy’s eyes, he mostly serves as a vehicle for the lessons taught by Duke and his friends. Told as a series of conversations about life, Handbook for Boys frequently prioritizes life lessons over plot. Young readers looking for a clear storyline may find the novel’s philosophical tone preachy or see the issues explored in the story to be dated.

Ultimately, Handbook for Boys is an insightful look into mentorship and second chances that presents some potentially helpful advice for young people, including the importance of making choices that better their lives. However, it occasionally leans too heavily into its advice-giving side at the expense of staying engaging. Readers who want an entertaining story about overcoming obstacles may want to skip Handbook for Boys and instead read the Hazelwood High Trilogy by Sharon M. Drape or the Alabama Moon Series by Watt Key.

“Nobody talks about that stuff except you guys. They don’t even talk about all this stuff in school,” Jimmy. –Handbook for Boys