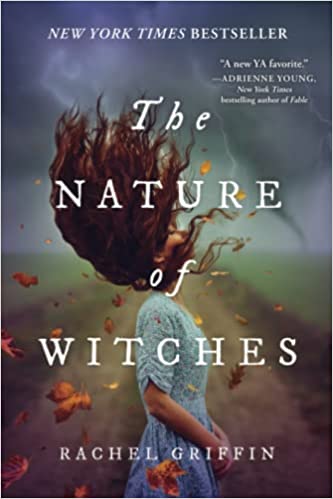 “Winter is the truest of the seasons. It’s what remains after everything else is stripped away. The leaves fall. The colors fade. The branches get brittle. And if you can love the earth, understand it when all the beauty is gone and see it for what it is, that’s magic,” Clara. –The Nature of Witches

Witches have been in control of the weather for hundreds of years, keeping the atmosphere calm and stable. Each witch has powers based in the seasons: winter, spring, summer, and fall. Shaders, or people without magic, depend too much on the witches to keep the weather steady, pushing the limits of the witches. Thus, shaders have been starting to think that the magic is infinite and, as Clara says, “As if this planet were infinite.” More and more witches are being depleted of their powers and dying, causing the witch community to grow tired.

Clara Densmore is not just any ordinary 17-year-old witch, she is an Everwitch. An Everwitch is a witch that is tied to all four seasons. It is a rare and powerful magic; she can use her magic year-round whereas regular witches can only use their magic during their designated season. However, Clara cannot fully control her magic, which resulted in the deaths of her parents and best friend, Nikki. Clara fears her powers, and she is scared that by using her magic she will hurt other people she loves.

Then, Clara’s mentor and teacher, Mr. Hart, dies. Clara must continue her Everwitch training with two new visitors: a teacher named Mr. Burrows and his assistant, Sang Park, from the Western School of Solar Magic. Sang, a spring witch who has an interest in botany, is tasked as Clara’s primary trainer, and soon becomes Clara’s love interest. As Clara struggles with her Everwitch magic and explores the romantic pull she feels toward Sang, she must decide if she wants to improve her control over her magic or be stripped of her magic.

The Nature of Witches is a riveting story filled with romance, self-discovery, and magic. Readers may become very emotional because they are immersed in Clara’s first-person perspective. The story focuses on Clara, which allows readers to understand her thoughts and actions. Readers watch as Clara switches between wanting to be stripped of her magic and accepting it. Clara’s mental struggle is relatable because she is deciding between what she wants, what would be “easy,” and her duty as the most powerful witch. In the end, Clara realizes that her magic is a part of her and is something she can’t live without. Through her experiences, Clara learns the importance of loving both herself and her powers.

Readers will meet several complex, lovable characters inside the pages of The Nature of Witches. Clara and the other characters are portrayed with depth, showing both their good and bad traits. LGBTQ themes are expressed through Paige’s and Clara’s romantic past; the two girls were friends who became partners. There were no labels put on either person or judgment from anyone, suggesting that it is wholly accepted and integrated into society.

Griffin also includes thought-out and vivid worldbuilding by using mystical and descriptive language. The Nature of Witches is engrossing and easy to read, so readers will fly through the pages. Although the inclusion of witches and magic that controls the atmosphere is highly fictional, the story’s main idea is based on the possibility of snowstorms in June and tornadoes in winter. Climate change has been a hot topic for years and this story serves as a reminder that our world is still suffering, and readers must do something before it’s too late.

The Nature of Witches lets readers know that the first step to help stop climate change is to understand the harmful things humans do that affect the climate. The book does not give specific ways to make changes. However, it implies that people will have to face some type of horrible disaster before they accept that things must change. As Clara points out, “We aren’t in this alone and shouldn’t act like we are; the atmosphere is hurting, and that’s a problem for all of us, witches and shaders alike. The challenge is great, and we have a lot of work ahead of us. But we’re in this together, and if there’s anything I’ve learned this past year, it’s that together is where the magic lies.” At the end of the day, we must communicate with each other and work together to effect change.

Griffin gives readers an earnest, thoughtful, and fantastical story about magic and self-acceptance. Both the characters and plot will keep readers interested. While The Nature of Witches has a timely and important message attached to it, the message is not shoved in readers’ faces. The story’s vivid worldbuilding, the interesting plot, and the lovable characters make The Nature of Witches the perfect book for readers who love fantasy and climate fiction. Readers interested in reading another fantastical story that shows the dangers of climate change should grab a copy of Spark by Sarah Beth Durst.

“Winter is the truest of the seasons. It’s what remains after everything else is stripped away. The leaves fall. The colors fade. The branches get brittle. And if you can love the earth, understand it when all the beauty is gone and see it for what it is, that’s magic,” Clara. –The Nature of Witches