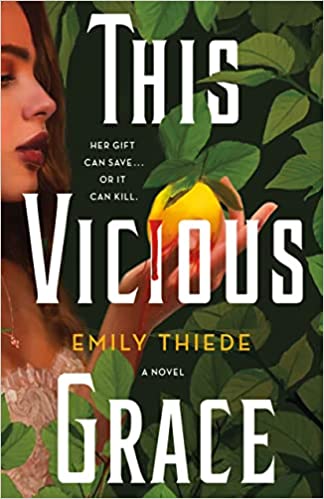 “You’re angry, and you should be, but you get to choose whether it will make you bitter or make you better,” Renata. — This Vicious Grace

Alessa is the latest finestra in a long line of people chosen by the goddess Dea to protect her island. Her powers are supposed to help her save her home, but so far they’ve only managed to kill three suitors simply through her touch. Her suitors, called Fonte, are paired with her in order to hone her power and strengthen their own, but instead, she overwhelms them. Alessa’s running out of time to learn how to use her power and save her people. There are only a few weeks left until the god, Crollo, sends his demons to attack and wipe out all human life from the island.

In order to keep her safe, Alessa is separated from her family, her old life, and even her name. In order to train, she is locked away. She is lonely. The Fontes she’s paired with are supposed to supply her with a partner, a mate, and a friend, but instead, their unusual deaths have caused an even deeper rift between her and everyone else on the island. Then, a powerful priest begins convincing people that her inability to control her power is evidence that she is a false prophet. He begins to amass a following of very angry, very scared people that are willing to do anything to prevent her from harming others, including kill her. One night, one of Alessa’s own guards even tries to assassinate her. In response, she hires a bodyguard, Dante, to protect her until she can learn how to control her powers and defeat the demons.

A group of prospective Fonte joins Alessa in order to figure out who, if any of them, can handle her power enough to use it. These Fonte are the only hope Alessa has at defeating the demons. Alessa’s relationship with her new group of prospective Fontes starts off rocky. Because of her failures with the three prior Fontes, the new Fontes are skeptical of her abilities and wary of her motives. When Dante realizes he can handle Alessa’s power, he helps her understand how to wield it. Then, Dante slowly paves the way for Alessa to build a friendship with the new Fontes, and to work alongside them to master her powers.

This Vicious Grace is told from Alessa’s point of view, and she is a very likable main character. Alessa is a kind, level-headed main character with an affinity for justice. Despite how she’s treated, she still chooses to fight the good fight over and over again and is rewarded for it in the end. Alessa stays true to herself and is a fair and good person who is willing to do whatever it takes to save her people.

A tale of friendship, overcoming loneliness, and holding out hope despite insurmountable odds, This Vicious Grace is a good novel for readers who enjoy a slow burn romance within a fantasy world filled with gods, demons, and war. This Vicious Grace is Emily Thiede’s debut novel. It includes a lot of references to malevolent gods, vicious demons, and mystical powers and abilities. Though it is a fantasy world, it is not hard to understand the complicated plot and numerous characters. This action-packed book is a fun and interesting read for fantasy lovers. Readers looking for more books set in a fantasy world should also read Serpent & Dove by Shelby Mahurin.

“You’re angry, and you should be, but you get to choose whether it will make you bitter or make you better,” Renata. — This Vicious Grace