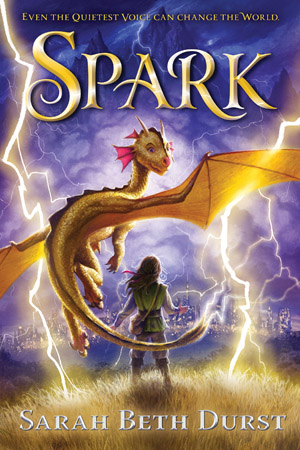 In Algorria, storm beasts and their guardians create perfect weather every day, bringing prosperity and peace to Algorria. Twelve-year-old Mina has been carefully tending a storm beast egg, and is eager for the egg to hatch. Everyone is surprised when a lightning beast hatches from Mina’s egg. Mina’s family thinks that their quiet, shy daughter should not be paired up with a lightning beast, a creature of fire and chaos.

Unlike her family, Mina is sure that she, her storm beast, and Pixit are perfect for each other. Mina and Pixit are enrolled in lightning school and begin to learn the skills of lightning guardians. Even though Mina has always dreamed of completing daring acts, she struggles at school. She is unable to learn the basic skills and often feels as if she doesn’t fit in anywhere.

When Mina accidentally learns that Alorria’s perfect weather comes at a devastating cost, she discovers that powerful people are willing to do anything to hide the truth. Mina has never been able to speak out, but now without her help people will die. Mina and Pixit both dream of being like storybook heroes that change the world for the better. Is there any way that Mina can find her voice?

Readers will pick up Spark because of the beautiful cover of a storm beast, but they will keep turning the pages until the very end because of the beautiful relationship between Mina and Pixit. Anyone who has been afraid to speak up will relate to Mina, who is happy to let others take over the conversation. Yet within the quiet girl’s heart is the dream of making a positive impact in the world. Mina often struggles with feelings of insecurity, but with Pixit’s help Mina learns that being “different isn’t wrong.” In order to help others, Mina does not need to change herself. Instead, she only needs to use her own unique talents.

This engaging story uses a unique setting to bring modern-day problems to the forefront. As part of Mina’s studies, she is introduced to the idea of isolationism which is explained as follows: “Isolationism—defined as caring only about your own country—had the benefit of limiting the area that the early storm beast and guardians had to protect. Here’s the important bit to understand: all the world’s weather is connected, and more complex than you can comprehend.”

As Mina learns more about her country, she gets a lesson in false propaganda and how the political leaders are willing to suppress the truth because they fear change. However, the message is clear: “you can’t dismiss the facts just because you don’t like where they lead.” Even though Mina is quiet, she finds a way to become a leader. However, becoming a leader was not an easy choice for Mina. Her self-doubt and worry come through because Pixit can hear Mina’s thoughts. The relationship between Mina and her storm beast is so endearing that it will leave readers wishing they had a storm beast of their own.

Not only is Spark an exceptional story, but it also teaches readers that it is possible to change the world for the better. By the end of the story, Mina and Pixit feel like friends who have made a positive impact on you. Spark is an unforgettable story that will resonate with children and leave them wanting to be kinder, better people who do good in the world.