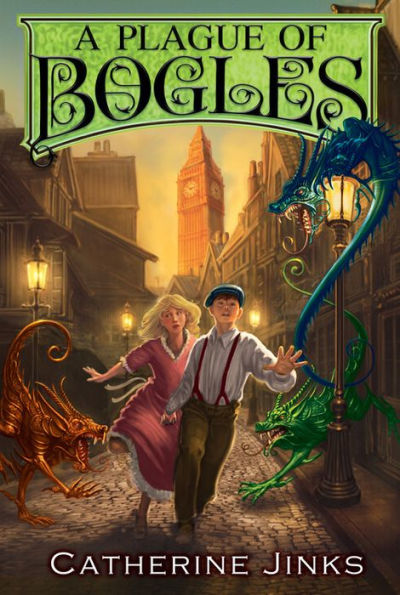 A Plague of Bogles

Bogles don’t hide in closets; they hide in small, dark places where they lie in wait for children they can devour.  Many adults don’t believe bogles exist, but Jem has seen a bogle.  When a child is sent to fetch some sherry from a basement and never returns, Mable goes in search of help and finds Jem.  Jem searches out the only person who can help, a bogler named Alfred.

In order to catch a bogle, Alfred needs some bait—a singing child.  In order to get off of the streets, Jem agrees to be bogle bait.  Jem and Alfred meet several interesting characters who have bogles that need eradicating. Soon they discover they need the help of Birdie, a gutsy girl with a beautiful voice.

To complicate the story, Jem is also trying to hide a secret.  As Jem tries to help solve the mystery of why there are so many bogles in one area, he is also trying to find Sarah Pickles, the woman who sold him as bogle food.

The story begins with suspense and mystery that make it more interesting for readers, but the language may be difficult for younger audiences.  For example, Jem says, “I never prigged a thing, save for that morsel o’ cheese.” The book also mentions debtors’ prisoners and homeless children.  The complicated themes and adult nature of some scenes may not be suitable for all children.

Jem is frightened of going to prison because of his past misdeeds, and he thinks about this often. Even though Jem does not want to end up in prison, he does not feel bad about stealing. Instead, Jem seems to think thievery is acceptable.  Jem, “had always favored the idea of bogling, because bogling was such a flash occupation, like smuggling or highway robbery.” As Alfred and Jem go about the city, they spend time in a tavern, where alcohol is served. (Although Jem would like some, Alfred won’t allow it.)