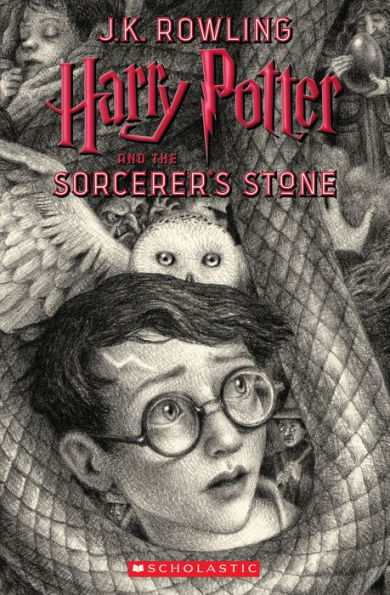 Harry Potter and the Sorcerer’s Stone

Harry can hardly believe his own ears when a giant man shows up on his eleventh birthday to tell him that he is a wizard. Yet it makes sense, as odd happenings have followed Harry all his life. Delighted to leave his unpleasant aunt and uncle behind, Harry goes to Hogwarts, the magical school that his parents both attended long before they were murdered by He-Who-Must-Not-Be-Named.

He-Who-Must-Not-Be-Named tried to kill Harry as well, but the attempt backfired and destroyed him. Harry doesn’t remember any of this, as he was only a baby, but he is famous in the wizarding world for causing the downfall of the evilest wizard in history. People expect greatness from Harry Potter, but he knows nothing about the magical world. Will Harry be able to rise to the expectations of those around him? Or should he forge his own path?

The latter seems more likely when odd things start happening at Hogwarts. Trolls, a forbidden corridor, and a suspicious Potions teacher are at the heart of a mystery Harry finds himself entangled in. Can he find out what is hidden, and protect it from others who want it for more sinister purposes? Joined by his classmates Ron and Hermione, the young trio must rise to face incredible dangers, or else the wizarding world will be plunged back into a darkness that hasn’t been seen in eleven years, since He-Who-Must-Not-Be-Named first vanished.

Harry Potter and the Sorcerer’s Stone is a wonderful read from cover to cover. J.K. Rowling has not only created a wide cast of well-developed, lovable characters, but an entire world of magic and wonder. Although the series revolves around magic, the story does not encourage children to try magic on their own. Spells involve simple words. For example, saying luminos creates light. The books advance throughout the series, becoming longer and slightly more mature, although still appropriate for elementary readers.

Readers will be sucked in from page one, drawn forward by an enticing mystery and delightful adventures. There is also an illustrated version of this novel that will further engage reluctant readers with beautiful, full-page illustrations. Be sure to have book two of the Harry Potter series close at hand, because readers will be clamoring for more upon finishing Harry Potter and the Sorcerer’s Stone.