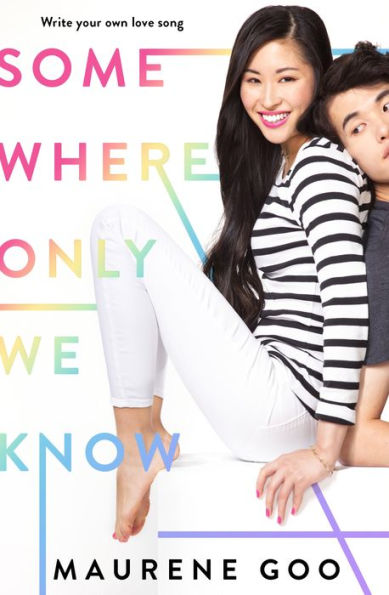 “The whole point of love was that you truly felt it, that it was so strong, that you had to be with that person, as if drawn by some otherworldly force,” Jack. –Somewhere Only We Know

Somewhere Only We Know

10:00 p.m.: Lucky is the biggest K-pop star on the scene, and she’s just performed her hit song “Heartbeat” in Hong Kong to thousands of adoring fans. She’s about to debut on The Later Tonight Show in America, which will hopefully be a breakout performance for her career. But right now? She’s in her fancy hotel trying to fall asleep, but dying for a hamburger.

11:00 p.m.: Jack is sneaking into a fancy hotel, on assignment for his tabloid job that he keeps secret from his parents. On his way out of the hotel, he runs into a girl wearing slippers who is single-mindedly determined to find a hamburger. She looks kind of familiar. She’s very cute. He’s maybe curious.

Somewhere Only We Know switches back and forth between Lucky and Jack’s point of view, which gives the reader a fun insight into each person’s thought process. Each character has a secret, and the multiple points of view allow the reader to understand the fear behind the secret. Another interesting aspect of the story is the insight into both character’s heritage—both are American-born Koreans, who see Korea in a unique light. Lucky often compares America and Korea’s differences, but one thing that is similar in both countries is the idea that “women need to be pretty more than anything.”

Even though Lucky is a K-pop artist, she is just like many young adults: she desires freedom, wonders what path her life should take, and worries about letting others down. Even though the story takes place over a 24-hour period, Lucky’s joy at being able to explore the world is contagious. Her protective partner in crime, Jack, is not only insanely attractive, but is also struggling to figure out his future as he explores the narrow definitions of right and wrong.

Somewhere Only We Know is a fast-paced, funny romance that readers will not be able to put down. The story will make readers laugh while also exploring the idea of “living a life of quality.” In the end, Jack realizes that a “quality life involved caring for people. Being good to them. Being a good person for them in addition to yourself.” Somewhere Only We Know doesn’t gloss over the hard work that is involved in having a quality life. Lucky finally receives therapy to help her with her anxiety, and Jack has to be honest with his parents about his fears and dreams.

Somewhere Only We Know has two characters that fall in love in a day. Readers will enjoy watching the two stumble their way through that day. In the end, Lucky and Jack go their separate ways because they need to figure out their own issues, but the story leaves the reader with the hopeful thought that maybe love can grow when the time is right.

“The whole point of love was that you truly felt it, that it was so strong, that you had to be with that person, as if drawn by some otherworldly force,” Jack. –Somewhere Only We Know