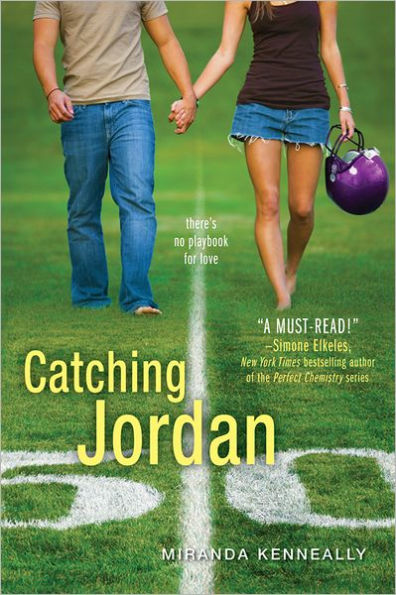 It’s like what I told Carter. Sometimes you have to give something up to get something better,” Jordan Woods. –Catching Jordan

As a quarterback, senior Jordan Woods dreams to play in the big leagues. The only problem? She’s a girl. That doesn’t stop her from pursuing a football scholarship to the University of Alabama. When a new quarterback comes to town, she realizes that she will have some competition for her position on the field—and for her heart. Ty Green, the new quarterback, is extremely good-looking. Jordan has an instant crush on her competition, but he isn’t her only problem.

Her father, a starting NFL quarterback, won’t come to her games, and she’s under the scrutiny of college recruiters. To make matters worse, her best friend, Sam Henry, is in love with her. But Jordan doesn’t know how Sam feels, and it soon becomes complicated when Sam reveals his feelings. Jordan must figure out how to stand out on the football field and how to navigate dating relationships and young love.

Catching Jordan is a story that pulls readers in with realistic struggles. All her life she has had to fight against the world telling her that a girl could never stand up and play at the college level. Her own dad, a former NFL player, doesn’t want her playing out of fear of injury. She also has trouble trying to navigate dating and love, something she has always avoided out of fear of losing the respect of her teammates.

Although the story has some cliches, Jordan’s character makes reading Catching Jordan worthwhile. Readers will fall in love with Jordan. Even though Jordan is considered “one of the guys,” she has the same emotions as any other girl.  Whether she is venting about her father, or trying to figure out how to kiss, her voice comes across as real, honest, and funny. Readers will be able to connect with Jordan, who will take them on an emotional ride full of laughs and tears.

Even though the story features football, at the heart of the story is fun, flirty romance. However, the story isn’t just about love; it is also about overcoming obstacles and never giving up. Jordan isn’t afraid of standing up for what she believes in and she is willing to reach for her dream, even if it seems unattainable. The strong character development and interwoven football plays make Catching Jordan an excellent read for mature readers. Although the story appeals to sports fans, anyone who wants to read a fabulously fun story should pick up Catching Jordan.

It’s like what I told Carter. Sometimes you have to give something up to get something better,” Jordan Woods. –Catching Jordan