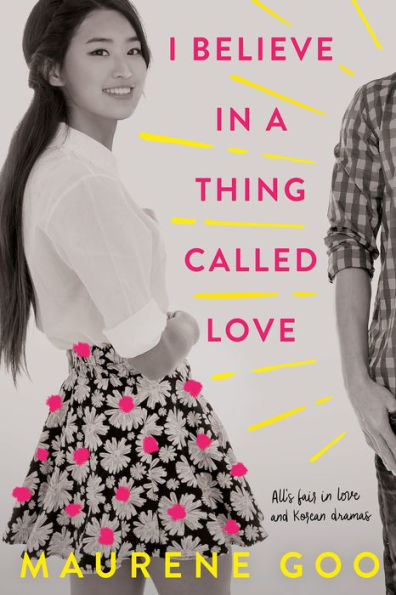 “I believed, and still believe, that you can build your dreams brick by brick. That you can accomplish anything with persistence. Even falling in love,” Desi. —I Believe in A Thing Called Love

I Believe in A Thing Called Love

Desi has a plan for everything. With a plan, anything is possible. That’s how she became the student body president and a soccer star. That’s how she’ll get into Stanford. Desi knows how to plan. She knows how to study. But, when it comes to boys, Desi is a flailure. “Flirt + failure = flailure.”

Desi is a disaster at romance. But when a hot art student moves to her school, Desi decides she wants to capture his attention. After watching Korean dramas, Desi realizes that love is, “like a freaking equation!” Desi is determined to be like the K drama’s unlucky heroine, who always ends up with her true love. Desi follows her, “K Drama steps to True Love,” and goes after the moody, elusive artist Luca Drakos. After a boat rescue, love triangle, and staged car crash, will Desi end up in the arms of Luca?

I Believe in A Thing Called Love will capture the reader’s heart from the first chapter. Told from Desi’s point of view, readers will laugh at Desi’s crazy antics, understand her insecurities, and root for her as she goes after the guy of her dreams. Desi wants to control everything, but this smart nerdy girl is hilariously clueless when it comes to boys. Desi isn’t portrayed as a stereotypical smart girl; she also isn’t perfect, and Desi’s imperfections make her even more lovable.

Desi has a strong and warm relationship with her father. Despite the fact that he is a mechanic and often has grease-stained hands, despite his imperfect English, and his love for watching K dramas, Desi is never embarrassed by her father. Desi’s father isn’t just a background character, but a well-developed part of the story. Desi’s father understands her quirks but doesn’t try to change her. The readers will appreciate the scenes with Desi and her father just as much as the failed romance scenes.

I Believe in A Thing Called Love isn’t just a typical teen romance. Through Desi’s experiences, readers will learn valuable lessons. When Desi is afraid that she is acting weird, Luca tells her, “Everyone’s weird, though. If you’re not even a little weird, you are truly weird. In a bad way. Not in the good way.” When Desi thinks about giving up on love, her father tells her, “You cannot control who you love, Desi, but you can always control how hard you fight, okay?” In the end, not all of Desi’s plans work out and despite the pain of failure, Desi knows life can still be good.

Do not pick up I Believe in A Thing Called Love unless you have time to finish the book because once you pick it up, you will not want to put it down. I Believe in A Thing Called Love takes a humorous look at first love and will leave readers with a smile. Desi is a heroine that will not be forgotten easily. The story ends with a list of K dramas that readers may want to watch. And after seeing Desi put the K drama’s love formula to the test, readers may also become hooked on K drama’s themselves.

“I believed, and still believe, that you can build your dreams brick by brick. That you can accomplish anything with persistence. Even falling in love,” Desi. —I Believe in A Thing Called Love