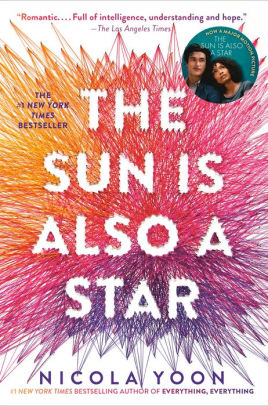 “Daniel lives in the nebulous space in between. Maybe he wasn’t meant to meet Natasha today. Maybe it was random chance after all. But once they met, the rest of it, the love between them, was inevitable,” Narrator -The Sun is Also a Star

Natasha Kingsley, a lover of science, believes in facts and evidence. According to Natasha, nothing lasts forever. There is no “meant to be,” and there is no such thing as love.

Daniel Jae Ho Bae, a poet, believes in love and destiny. He trusts that the specific amount of circumstances required to bring two strangers together has meaning, even if it can’t be scientifically explained. On his way to a Yale interview, Daniel sees a beautiful girl with large pink headphones walk into a record store. Obeying what he believes are signs from the Universe, Daniel follows her and finds his world colliding with Natasha’s.

Compelled by the inexplicable feeling that they are meant to be, Daniel postpones his interview in order to prove that love is real by making Natasha fall in love with him in one day. Natasha reluctantly agrees to this plan. However, Natasha is almost certain they are not meant to be a couple because it is likely her last day in America. Natasha and her family, who are Jamaican immigrants, have been asked to leave the country and return to Jamaica following her father’s DUI.

Despite the impending threat to her life in America and her aversion to love, Natasha finds herself falling for Daniel. Eventually, the secret of Natasha’s deportation is revealed and the two vow to make the most of their time together by condensing a whole relationship into one day. Despite their respective responsibilities for the day, they always find their way back to one another, proving their destiny is to be in each other’s lives.

However, in the end, Natasha cannot change her fate and must return to Jamaica with her family, while Daniel remains in America to pursue his dreams of becoming a poet. Due to the distance, Natasha and Daniel grow apart. But chance brings them together years later, making the readers wonder if they are meant to be after all.

The novel mainly switches between Daniel and Natasha’s perspectives, with brief interruptions to feature the perspective of supporting characters or to explain scientific concepts relevant to the story. Other chapters also provide historical context for relationships between racial groups in America. For example, the historical connection between Korean immigrants and the black-hair care industry.

The novel also depicts the experiences of young first and second-generation immigrants. Although Daniel was born in America, his parents view American culture as a threat to their Korean values. On the other hand, Natasha was not born in the United States but still views America as her home. Despite the history of racial tension between their cultures, Daniel and Natasha bond over their shared identity as Americans.

Overall, The Sun is Also a Star is an irresistible love story that explores the connection between art and science. Through beautiful metaphors and complex characters, Nicola Yoon exposes the poetic nature of science, which ultimately brings people together.

“Daniel lives in the nebulous space in between. Maybe he wasn’t meant to meet Natasha today. Maybe it was random chance after all. But once they met, the rest of it, the love between them, was inevitable,” Narrator -The Sun is Also a Star