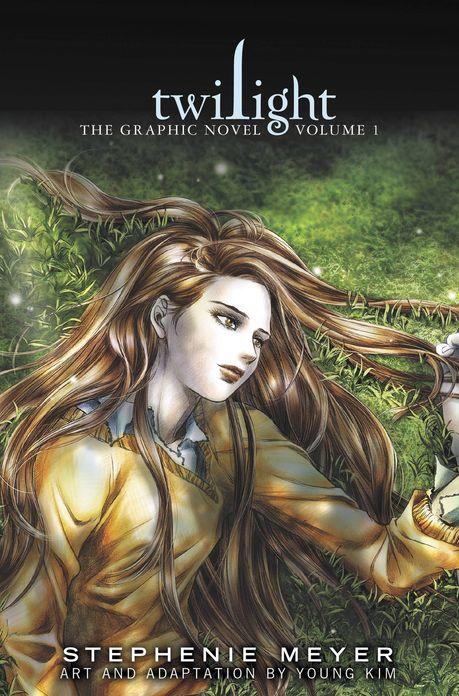 “There was part of him – and I didn’t know how potent that part might be – that thirsted for my blood,” Bella Swan. ­– Twilight: The Graphic Novel, Volume 1

by Stephenie Meyer, Art and Adaptation by Young Kim

When Bella’s mother gets remarried, Bella leaves her home in sunny Phoenix and goes to live with her father in the perpetually rainy town of Forks, Washington. Forks is a tiny, gloomy town and Bella is fully prepared to be miserable for her final two years of high school. She doesn’t expect anything interesting to happen in Forks. That is, of course, until she meets Edward Cullen.

Something is different about Edward. Breathtakingly beautiful and from a wealthy family, he baffles Bella with wild mood swings. When they first meet, he instantly despises her to the point of frightening her. Then—after disappearing for a week—he appears perfectly cordial. But it’s not until Edward saves her life in a feat of superhuman strength that Bella realizes the Cullen family is guarding a dangerous secret.

It would be smarter to walk away. Edward is unsure if he will be able to resist his thirst for Bella’s blood. But by the time she realizes the danger she is in, it’s too late. Live or die, Bella has fallen in love with Edward. She can’t walk away, even if her relationship with Edward costs her entire life.

Twilight is an epic story of love overcoming all challenges. In this graphic novel, Kim does a wonderful job bringing the characters and the storyline to life. By breaking the first book into segments, Kim ensures none of the essential story points are missing. For those who have not read Twilight and for avid fans alike, this graphic novel is an enjoyable escape into the Twilight universe.

Twilight, The Graphic Novel, Volume I uses soft shades of grey to bring its beautiful illustrations to life. The characters are all drawn to be beautiful, which is aesthetically pleasing if not the most accurate. Occasional splashes of color emphasize important moments and the characters’ expressions are easy to understand, which adds depth to the story. The graphic novel format manages to capture the essence of the original Twilight book without losing any of the essential aspects of the original story, an impressive feat that makes this a wonderful choice for reluctant readers.

Bella is not an overpowering heroine; she is quiet and clumsy to a fault, but she is fiercely loyal and brave. Bella risks everything for love, a choice that not all adults will agree with, but that most readers will understand as they follow Bella’s journey. Twilight is a wonderful story that swept through a generation of young readers like wildfire. Now in graphic novel form, it will continue to be picked up by even the most reluctant readers in years to come.

“There was part of him – and I didn’t know how potent that part might be – that thirsted for my blood,” Bella Swan. ­– Twilight: The Graphic Novel, Volume 1