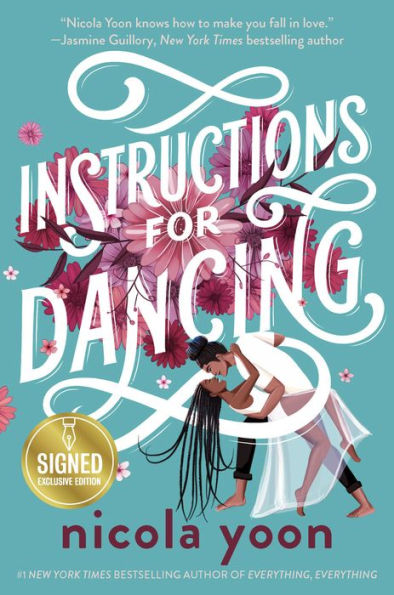 “Our fingertips brush and it feels like I’m going to slip away from him. But I don’t. At the last second, I curl my fingers and our hands catch. And then I do the thing you’re supposed to do when you find love. I hold on,” Evie. ― Instructions for Dancing

High school senior Yvette “Evie” Thomas used to believe in contemporary romance and the power of love; however, this belief has begun to fade. Her parents got divorced when her father cheated; Evie carries the burden of knowing why her parents divorced. Evie has given up on romance altogether, donating her shelves of contemporary romance novels. Then a chance encounter suddenly leaves Evie with the power to see a couple’s past, present, and future romance when she sees them kiss! However, she can only see a couple’s romantic history if they are in love and she only sees it once (it is also possible for Evie to see her own if she keeps her eyes open when she kisses someone).

Then a mysterious woman and a book on how to dance suddenly lead her on a path that she desperately wishes to stray from. Evie finds La Brea Dance Studio, where she learns dance with Xavier Woods, better known as X. He’s exactly like the guys in her romance books: handsome, tall, and a rock musician, the kind of guy Evie needs to stay away from. But X doesn’t hesitate to enter a ballroom dance competition with Evie, even though they just met.

Instructions for Dancing is told from the perspective of Evie and includes the usual narrative style as well as text messages, lists, and small excerpts of dance instructions. In addition, Evie’s visions are separate chapters that use a unique font to indicate that Evie is looking into a couple’s romantic history. The different narrative styles add interest to the story, putting us in the head of Evie. It is realistic to how a teenage girl would think and remember things, such as putting things into lists or remembering funny text messages with her friends. However, the formatting can be a bit jarring for some people and can ruin the pacing of the story.

Evie’s visions have taught her one thing and one thing only: love ends in heartbreak. She believes that love always ends with heartbreak and that all romance novels have lied about their happily ever afters. “What I’ve learned over the last three weeks is that all my old romance novels ended too quickly. Chapters were missing from the end. If they told the real story―the entire story―each couple would’ve eventually broken up, due to neglect or boredom or betrayal or distance or death. Given enough time, all love stories turn into heartbreak stories. Heartbreak = love + time.”

Therefore she approaches love with caution and hesitance, but as she takes ballroom dance lessons and gets to learn more about X, she begins to navigate the world of love around her. Evie learns about love beyond the surface level. Not all love is what it seems on the surface. No one comes out of love unscathed, but Evie learns that it’s not the ending that matters and that love, while hurtful, is worth holding onto.

“Our fingertips brush and it feels like I’m going to slip away from him. But I don’t. At the last second, I curl my fingers and our hands catch. And then I do the thing you’re supposed to do when you find love. I hold on,” Evie. ― Instructions for Dancing