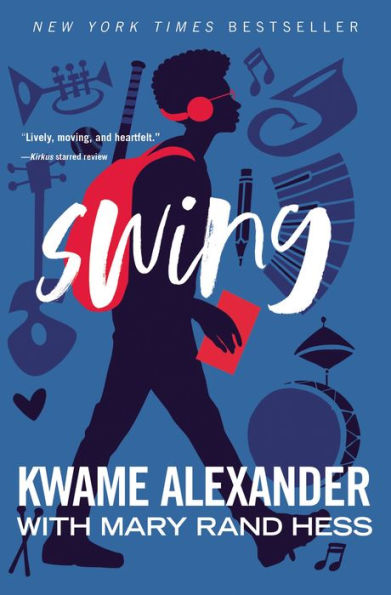 “I want to see you dare to enter the cave of uncertainty, find your way out to the other side, where the light of reward awaits,” Walt Disney Jones, aka Swing, — Swing

Despite their love for baseball, Noah and Walt are terrible players. Walt, who now requests to be called Swing (a request that Noah ignores), is undeterred. As with everything else in his life—jazz, love, and becoming cool—Swing is always willing to take a chance and wants to convince Noah to take swings in his life too.

Noah has been pining after his childhood best friend, Sam, since third grade. When Noah uncovers a set of love letters, he uses his art skills to adapt the letters to help him articulate his feelings for Sam. When Walt anonymously sends one of Noah’s letters to Sam, Noah must decide whether to put himself out there, even if it means rejection.

While Noah grapples with his emotions, many American flags are being left around town. Some think it’s a prank, but others seem to think that something more sinister is going on. The rising tensions and prejudices of their town come to light as Noah struggles to find confidence.

Despite being the main character, Noah is a shadowy figure compared to Swing. Swing’s vibrant sense of humor and optimistic outlook never waiver, and he has endless methods for trying to get Noah to see that life can be sunnier with a little effort. Noah, who can be petulant, drags his feet at most of Swing’s suggestions and comments. Many of Noah’s problems could be fixed if he earnestly took Swing’s advice. However, as the story progresses, Noah learns to take life in stride.

Most of the novel focuses on Noah’s conflicts with his unrequited love for Sam. Noah thinks he’s superior to Sam’s current boyfriend, Cruz, who is a varsity baseball player. Much of Swing’s advice for Noah surrounds this topic, as it consumes Noah’s every waking moment. There are moments where Noah’s passion for art comes up, but often it is to impress Sam in some way. Occasionally, Noah’s pining and self-pitying nature can be overbearing. However, he eventually finds the courage to tell Sam how he feels.

Although Swing, Noah, and Cruz all enjoy baseball, the main focus of Swing is not baseball. Instead, baseball is used to highlight Swing’s willingness to go after what he wants. Unlike Swing, Noah’s reserved nature holds him back from going after what he wants, and Noah himself gives up baseball early in the book.

Swing tackles a lot of themes, including love, friendship, and prejudice. Not all the topics are fully expounded upon, and because of the twist ending some narratives are shortened. Swing is also told in free verse, and various art pieces appear as part of the story. These creative elements enhance Noah’s emotions and the reading experience. Overall, Swing shows that life is what people make of it. The most important lesson Swing offers is that people should find the courage within themselves to swing for worthy goals.

“I want to see you dare to enter the cave of uncertainty, find your way out to the other side, where the light of reward awaits,” Walt Disney Jones, aka Swing, — Swing