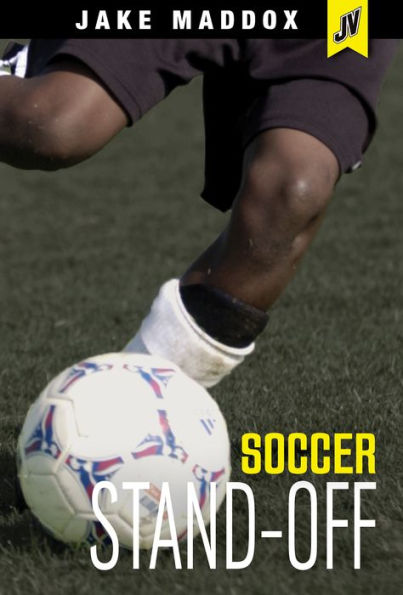 Ethan “was playing better than ever, making sure to support his team as best he could.” —Soccer Stand-Off

Ethan is pumped for soccer this year. Since he is an eighth-grader, he’ll definitely be placed on the starting lineup. However, a startling discovery is waiting for Ethan on the soccer field. On the first day of tryouts, he learns that his soccer coach is his least favorite teacher, Ms. Brezinka. She taught him science last year–a subject he almost failed. Suddenly, Ethan’s take on the new season has gone from excitement to dread. What does a woman know about coaching a boys’ soccer team?

Although a few boys decided to quit the team, Ethan and his friend, Malik, stay. Ethan slacks off during tryouts though, landing him a spot on defense. Despite Malik’s constant defense of Ms. B and Ethan’s mom’s lectures about how “women often have to work twice as hard to be taken half as seriously as men,” Ethan can’t seem to fix his attitude. Finally, after he and Malik get into a fight that lands Ethan a detention and an indefinite grounding, Ethan realizes he is acting selfishly. He confesses to Ms. B that he was embarrassed about doing so poorly in her science class, so he convinced himself into believing she was the problem with the soccer team instead of himself. Ms. B gives him a clean slate, and Ethan starts to play as a member of the team. Although it takes his teammates a while to accept him back, the team eventually turns into a well-oiled machine that wins their first game.

Soccer Stand-Off focuses on Ethan’s inner conflict of being embarrassed about almost failing Ms. B’s class and lashing out. The story is told from Ethan’s perspective, so he is the only one that undergoes character development. Ethan usually feels pangs of guilt when he says something hurtful, making him a frustrating but relatable character. The story is realistic in that it takes Ethan a while to realize the mistakes he is making. After realizing he was wrong for believing a woman couldn’t coach a boys’ soccer team, he learns to play as part of the team instead of only serving himself on the field.

In addition to his internal conflict, Soccer Stand-Off also focuses on Ethan’s conflict with his mom, Malik, and Ms. B. He has friends who oppose Ms. B’s coaching of the boys’ soccer team as well as friends who support Ms. B. Malik’s constant defense of Ms. B is what finally gets through to Ethan. He bravely stands up to the boys who quit the team and apologizes to Ms. B, Malik, and the rest of the team for acting selfishly.

Soccer Stand-Off is part of the Jake Maddox JV series, a series of standalone sports books. It has a simple plot and is separated into short, easy-to-read chapters, making it good for reluctant readers. Discussion questions, writing prompts, soccer terms, and a glossary are included in the back of the book. The book describes a few soccer practices and one soccer game in detail, but the book isn’t overloaded with soccer scenes. Instead, it focuses on the morals Ethan learns. Soccer Stand-Off teaches readers this important lesson: when you have a problem, look at the way you’re behaving before blaming someone else.

Ethan “was playing better than ever, making sure to support his team as best he could.” —Soccer Stand-Off