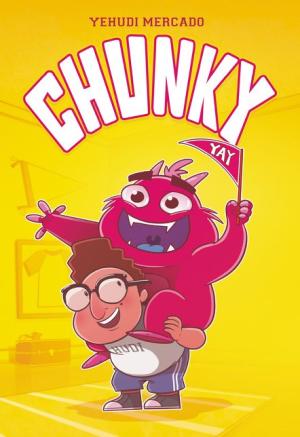 “Hudi . . . You’re the funniest kid I’ve ever had the pleasure of being an imaginary mascot for,” Chunky. —Chunky

According to the doctors, Hudi needs to lose weight. His parents have him try out for various sports, much to Hudi’s chagrin. At least Hudi’s imaginary friend, Chunky, is the best hype-man any kid could ask for. While trying out different sports and striking out each time, Chunky pushes Hudi towards comedy and encourages Hudi to embrace his unconventionality.

Written and illustrated as a graphic memoir by Yehudi Mercado, Chunky gives a refreshing look into the world of youth sports. Hudi is not good at any of the sports that he tries, (except for maybe football), but Chunky and his sense of humor keep his spirits high, even when he gets injured or when things go terribly wrong. The book emphasizes themes about following what you love, having a good attitude, and the importance of having someone looking out for you.

Hudi’s father loses his job, which is when Hudi’s spirits drop and he temporarily loses his love for comedy. Hudi instead commits to football, where he excels because he’s bigger than all the other kids. However, Chunky has a harder time reaching Hudi during these scenes, as Hudi is concerned with winning and has lost his individuality. Hudi and Chunky do reconcile and Hudi returns to his jokester self, even though it means that he won’t play football anymore. This is fine with Hudi, as he gets his friend back and he can be himself—and pursue comedy!

Much like Hudi himself, the illustrations are playful and fun, with lots of warm reds and yellows. Chunky is a red, imaginary creature, and his design is goofy and sweet. The use of illustrations really shines when Hudi and Chunky make jokes about the various sports that Hudi attempts. At the end of each section, Chunky and Hudi sit at a table in what looks to be a mock-press conference. This hopping back and forth in Hudi’s reality creates a fun and interesting atmosphere that helps bring Hudi’s story and comedy to life.

Mercado also touches on being Mexican and Jewish, and sometimes Spanish is used within the story. This doesn’t make the story difficult to understand, but instead, it highlights more of Hudi and his family’s background. In general, there is also a strong sense of family throughout, and Hudi’s father losing his job hits the family hard. Overall, Chunky has an innate love and passion surging through the pages—a love for comedy, family, and oneself. Kids of all ages will enjoy Mercado’s comedy and colorful illustrations. Chunky shows us that we don’t have to be good at everything, but that we can do anything with enthusiasm and a good sense of humor.

“Hudi . . . You’re the funniest kid I’ve ever had the pleasure of being an imaginary mascot for,” Chunky. —Chunky