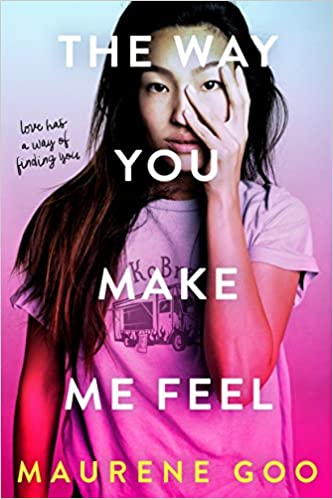 “I feel like that guy in a rom-com who freaks out over the obviously perfect-catch girl having feelings for him. Like, why am I obsessing over a love declaration from a nice guy?” Clara. –The Way You Make Me Feel

The Way You Make Me Feel

Sixteen-year-old Clara Shin doesn’t take life too seriously, but when she pushes one joke too far, her dad sentences her to a summer working on his food truck the KoBra. Clara was supposed to go on vacation to Tulum to visit her social media influencer mom; she was supposed to spend lazy days at the pool with her buddies. Instead, she is stuck in a sweaty Korean-Brazilian food truck all day, every day? Worse still, she is working alongside her nemesis, Rose Carver. It’s definitely not the carefree summer Clara had imagined.

But as time goes on, it turns out that maybe Rose isn’t so bad. And maybe the boy named Hamlet (yes, Hamlet) who’s crushing on Clara is pretty cute. And perhaps Clara actually feels invested in her dad’s business. What if taking this summer seriously means Clara has to leave her old self behind?

Clara doesn’t mind being the center of attention if she’s carrying out a prank or causing mischief. Because of her bad attitude, Clara is a surprisingly unlikable protagonist who always focuses on herself. Even though Clara befriends Rose and Hamlet, the reader is left wondering why two nice, over-achieving teens would spend time with Clara. When forced to work at her father’s food truck, Clara matures slightly. Unfortunately, Clara’s personal growth doesn’t make up for her poor attitude and her transformation at the end of the book is not believable.

While there is a host of other characters in the book, none of them are well-developed. Clara’s nemesis, Rose, seems like a well-adjusted teenager, yet she has no friends. Rose’s lack of friends is not believable because it is never explained why she has no friends. Plus, after years of hating each other, the girls quickly become besties, which is a little unrealistic. In addition, Clara’s father ignores his daughter’s outrageous behavior and temper tantrums. Even when Clara travels out of the country to visit her mother without telling him, her father’s reaction is mild. Because Clara is the only character who is well-developed, readers are left confused—why do Rose and Clara’s father act as they do?

The Way You Make Me Feel has a unique premise that revolves around a food truck; however, most of the conflict comes from Clara and Rose bickering, which becomes tedious. Several times throughout the story, Rose’s old friends appear—however, they are equally unlikable and add little to the story. The lack of character development and the absence of genuine conflict make The Way You Make Me Feel a book that will be quickly forgotten. While The Way You Make Me Feel is a disappointing read, Maureen Goo’s other books—Somewhere Only We Know and I Believe in A Thing Called Love—are excellent books that will make your heart swoon. However, If you’re hungry for a food-related romance, both A Pho Love Story by Loan Le and Love & Gelato by Jenna Evans Welch are sure to please.

“I feel like that guy in a rom-com who freaks out over the obviously perfect-catch girl having feelings for him. Like, why am I obsessing over a love declaration from a nice guy?” Clara. –The Way You Make Me Feel