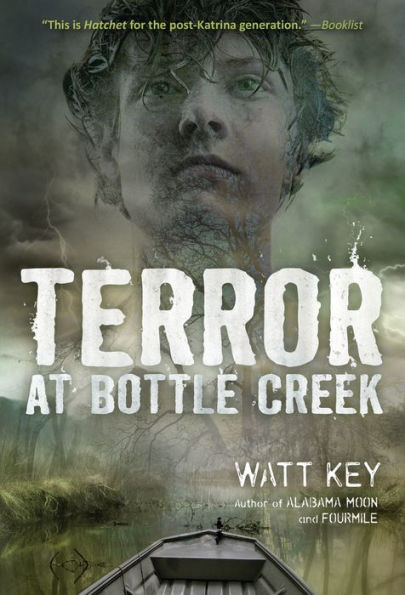 “You always got to be thinkin’ out in that swamp. It’s a pretty place, but you pull back the curtain and it gets evil real quick,” Dad. –Terror at Bottle Creek

Cort’s father is a local expert on hunting and swamp lore in lower Alabama and has been teaching his son everything he knows. But when a deadly Category 3 storm makes landfall and his father disappears, thirteen-year-old Cort must unexpectedly put all his skills—and bravery—to the test.

One catastrophe leads to another, leaving Cort and two neighbor girls to face the Gulf Coast hurricane the best they can. Lost in the middle of storm-thrashed wetlands, the three face dangerous, desperate wild animals, it’s up to Cort to win—or lose—the fight of their lives.

Terror at Bottle Creek sweeps readers into the Alabama swamps and shows the dangers that lurk beneath the water and on land. With the Bottle Creek Indian Mounds as a backdrop, the story creates an eerie and terrifying tone that will have readers biting their nails. Vicious hogs, deadly alligators, and other swamp creatures all head to higher ground during the storm. In order to survive, Cort and his two neighbors must face a hurricane, wild animals, hypothermia, a venomous snake bite, and their own fears.

Readers will relate to Cort, who is embarrassed to live in a houseboat and wishes his life was different. Cort also struggles to understand his changing feelings for his childhood friend, Liza. As Cort tries to save Liza and her sister, he faces difficult choices, but he tackles them with bravery and compassion. As he fights to survive in the swamp, he thinks of the lesson his father taught him. However, his memories also reveal angry feelings towards his father. Cort’s emotional struggles are interwoven with intense survival scenes, allowing the reader to empathize with Cort. By the end of the story, Cort realizes his value does not come from where he lives, but from his character.

“You always got to be thinkin’ out in that swamp. It’s a pretty place, but you pull back the curtain and it gets evil real quick,” Dad. –Terror at Bottle Creek