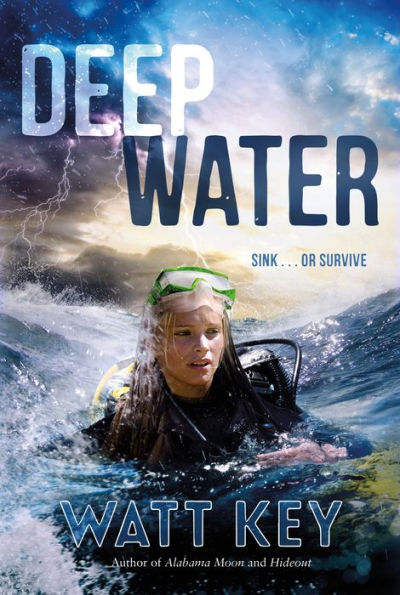 Mother Nature “doesn’t mind you admiring her, but she lets you know if you’ve gotten too close and overstayed your welcome. And if she feels disrespected and finds you vulnerable, stripped of all your comforts and safety, she’ll throw challenges at you,” Julie. –Deep Water

Twelve-year-old Julie Sims is still reeling from her parents’ separation and from being moved to a different city. On the other hand, she is looking forward to spending the summer with her father and helping him with his diving business. However, Julie soon finds out that her father hasn’t weathered the divorce well and his business is about to fail. When a rich client agrees to pay an extreme amount to go on a dive, Julie knows her father will have to say yes because he desperately needs the money.

When Julie’s father falls ill miles off the coast of Alabama, Julie knows she must guide the client and his reckless son, Shane, into the depths of the ocean. Both the son and father ignore Julie’s instructions during the dive. Julie realizes she’s in over her head, but it’s too late to avoid danger. When the anchor loses its grip, the boat floats away making it impossible for the scuba divers to locate it. Stranded in the middle of the ocean, Julie just hopes someone will find them before it’s too late. Can Julie keep everyone alive until help comes, or will they all sink to the bottom of the ocean?

Julie’s story focuses on survival and jumps into action right from the start. Deep Water is not a character-driven story but instead centers around Julie’s desire to survive and her conflicting emotions about Shane. Shane’s father is killed by a shark which makes the two teens realize that they must work together. As Julie gets to know Shane, she realizes that Shane’s bratty behavior is caused by the deep hurt he is hiding. Within this survival story, both Julie and Shane’s family dynamics are explored, adding another interesting element to the story.

Key’s love and respect for the ocean shine through the entire story. Even though Julie faces sharks, freezing waters, and other dangers, she doesn’t lose her love of the ocean. Deep Water is a suspenseful survival story that doesn’t rely on typical events. Instead, the story weaves unique elements to create an entertaining tale that readers will have a hard time putting down. The ending is predictable and the characters are not well developed, the story’s action and suspense will still entertain survival story fans. The Raft by S.A. Bodeen and Adrift by Paul Griffin will also be good for any readers who enjoy ocean-themed survival stories.

Mother Nature “doesn’t mind you admiring her, but she lets you know if you’ve gotten too close and overstayed your welcome. And if she feels disrespected and finds you vulnerable, stripped of all your comforts and safety, she’ll throw challenges at you,” Julie. –Deep Water