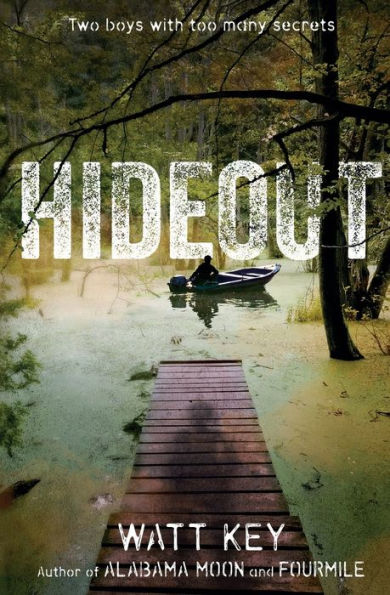 “You were always brave. You just never had to prove it,” Davey. –Hideout

Twelve-year-old Sam has been given a fishing boat by his father, but he hates fishing. Instead, he uses the boat to disappear for hours at a time, exploring the forbidden swampy surroundings of his bayou home. Then he discovers a strange kid named Davey, mysteriously alone, repairing an abandoned cabin deep in the woods. Not fooled by the boy’s evasive explanation as to why he’s on his own, Sam becomes entangled in his own efforts to help Davey. But this leads him to tell small lies that only get bigger as the danger increases for both boys and hidden truths become harder to conceal.

Hideout is a suspenseful survival story that delves into the complicated nature of friendship, self-esteem, and evil. Sam and his best friend, Grover, are savagely beaten. Sam is unable to forget about “the fight” and blames himself for the event. Told from Sam’s perspective, the reader gets an inside view of how Sam feels ashamed. He thinks that if he wasn’t a loser, “the fight” would have never happened. While Sam struggles with his own personal demons, he meets Davey who is living alone in the middle of a swamp.

Davey’s story is one full of hardship and mystery. Even though Davey is secretive, Sam is determined to help him. In doing so, Sam begins to tell lies that get him into a dangerous situation. Readers will be drawn into the two boys’ lives and wonder if their secrets will lead to their downfall.

Hideout expertly weaves the boys’ stories into an interesting, suspenseful story that is difficult to put down. The story ends on a happy note and shows Sam’s character growth. In the end, Sam learns several important lessons. He finally realizes that “there’s just bad people in the world. Sometimes they do bad things to people like us. But it doesn’t mean there’s anything wrong with us.” In addition, Sam learns that “being a man isn’t about winning fights and carrying guns. It’s about helping people however you can, no matter what.”

“You were always brave. You just never had to prove it,” Davey. –Hideout